Welcome To The Art of Ryan Adams

Way back in the days of yore (the mid-1980's) when I was attending Atascadero Junior High School I had the privilege of meeting a nice kid named Ryan Adams who was in my Class of 1985. We also attended high school together. I had seen nor heard hide nor hair of him since we graduated from Atascadero High School in 1989.

Recently, I had the privilege of reconnecting with him via Facebook and discovered that not only is he an artist but he is something much rarer than being an artist: he's a damned good one! Ryan is a wonderful painter whose chief influence is Vincent Van Gogh which is a good thing because Van Gogh was an amazing artist. In fact, Van Gogh is Ryan and mine favorite artist.

I am sharing with you below my favorite painting by him ("Good Morning in Atascadero"; 2010) which I also believe is his most recent work and I do so with his permission. 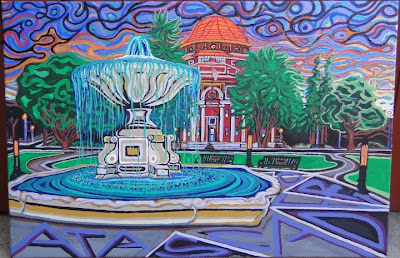 
Ryan's paintings are currently showing at The Haven in Atascadero at 6155 El Camino Real near the Carlton Hotel and next door to The Spa Central Coast.

Ryan is starting an artist's co-op in Atascadero and seeks talented artists interested in displaying their work. For $50 plus a $50 deposit each member artist will have a spot to display their work.
To contact him just email him at gtsadams@yahoo.com.
Posted by Kim Noyes at 4:34 PM 3 comments:

I beg your pardon for yet another long delay in posting here (nearly three months) but I've had more important fish to fry. It is also true to say that blogging is a habit either in doing or not doing. Once the habit is set either way it is hard to break out of it. However, I'm going to reverse that trend in the coming days and weeks. Once back in the blogging groove expect regular postings here. Facebook has absorbed all my free time of late as well as managing my Yahoo Groups and reading the news online. Of those three Facebook is the least important and thus the one that when I cut back my time spent on it will provide me with the excess time for blogging I so desperately need.

It appears I have a new job and a great one it is: part-time but lucrative enough to keep me going for now and help me dig out of my financial hole instead of digging deeper into it. David Richter of Rocks & Relics has taken me on as an assistant in his shows and so far the results have been amazing for both of us. Given the part-time nature of this I have time to do other part-time work for family and friends as well as tend to my K&K Earthwerks eBay Store. Ebay activity has been decent considering how little time and effort I have put into it but that is about to change. I haven't done much work for Steve Shears of late but that is about to change as the rainy season is about to significantly slow down for the year.

The aftershocks of my move last November and helping somebody else move a bunch of their stuff in storage in Adelaida up to Washington State are now almost finished. Both endeavors left me with a lot of excess stuff which I've been selling on Craigslist or giving away on Freecycle which has occupied not a little of my time and energy.

I've also been busy with the three local rockhounding clubs thus far this year (Santa Lucia Rockhounds, SLO Gem & Mineral Club, and the Orcutt Mineral Society). of which I'm a member of each and a vice president in the former two.

My Central Coast Rockhounds Yahoo Group is thriving of late with lots of great content provided by a core group of contributors including your's truly. This activity seems to be a reflection of the renewed interest in the rockhounding hobby in Central California this year. I have not made it out to rockhound this year which amazes and distresses me given this has been an El Nino rainy season with lots of runoff and wave action to promote erosion, a rockhound's greatest friend. I hope next week to get out and get after it so we'll see. There are many options: Ant Hill in Bakersfield, Templeton biconoids, Highway 46 West Summit biconoids, San Simeon State Beach, Villa Creek, Shell Creek fossils, Toro Creek/Hole-in-the Fence Beach, Montano de Oro State Beach, Cuesta Ridge, Salinas River, Adelaida-area mercury mines, Gaviota Coast, etcetera.

My pickup has had beaucoup problems for a long while; most distressingly my two cracked exhaust manifolds. A good buddy of mine is helping me get them fixed in my own carport for a nominal fee and teaching me the hidden wisdom of auto repair in the process which has been cool. We found that one or two of my six spark plugs were not even working and that some of my spark plug wires were a bit burned. Add to that the fact that both manifolds were cracked all the way through and had secondary cracks as well. This all explains the potent odor of gasoline coming from my exhaust fumes as well as my piss-poor gas mileage (sorta like an M1-A1 Abrams tank ~ gallons to the mile!). Thinking of what this might have done to my catalytic converter makes my butt pucker. We hope to be done by the end of this weekend. I've been stranded here at the house for three days thus far.

When not doing shows with Dave Richter I am attending church on weekends. Although my search for a church home has probably not ended I am settled on a church home for Saturday nights, to wit, Harvest Bible Church here in Paso Robles (actually just a few blocks away so I walk there). They have an excellent young pastor in Chris Swanson whom I first met before every going there when I sold my Paykel & Fischer washer & dryer and he picked up it.

As for Sunday mornings while not settled yet as far as I know I feel a lot of promise at North County Christian Fellowship also here in Paso Robles and pastored by Steve Calagna. I've only attended one Sunday service and one Wednesday night service there but both were excellent and I will go there again tomorrow morning. Pastor Steve is good at preaching the word even if he appears to not utilize the expository method which I prefer. Although a charismatic church and I am definitely not charismatic I am out of the business of finding reasons why I don't like churches and should not attend them and am simply allowing God to direct my steps in this matter.

Whichever church I find will be imperfect just like me and that's okay. We're in an evil time and the apostasy is running full-tilt and I accept that the pickings are slim when it comes to decent churches so whatever I find will be better than not attending church at all as I did for nearly two decades to my own detriment.I like what Pastor Swanson told me when I first met him and discussed with him some of this: "If you find the perfect church be certain to stay away." I got the point and laughed heartily.

I will soon be starting a society and politics blog I've named Daily Kim and I guarantee it will be better than Daily Kos.