This week the Orange County Fire Authority and Orange County Sheriff's Department began full or near-full encryption of their radio communications for fire and law. I'm not talking about the sort of stuff that has been encrypted for years because it was S.W.A.T. activity or surveillance operations and such. I'm talking about classic routine radio communications that so many of us have monitored our entire lives. I grew up in a household which in the 1970s listened to such radio traffic all the time. This is a growing trend in American life as governments at all levels become more militarized and secretive in the post-9/11 world covered in the fig-leaf terrorist concerns and mass shootings. Also, Motorola needs more useless shit (in this context) to sell taxpayers that not only do they not need, but it is not in their self-interest to purchase it through their local governments. There are many different reasons to oppose this trend of which each are valid. Below, my online HAM and fellow scannerhead Ben a.k.a. AI6YRHAM tweeted the below remark earlier today and much more eloquently than myself or anybody else I read making the public safety argument against. This is the argument which I feel most strongly about, even more so than the troubling secretive authoritarian militarization aspect of this trend let alone the inconvenience to the scanner-listening hobby which is the least important argument but an argument nonetheless. 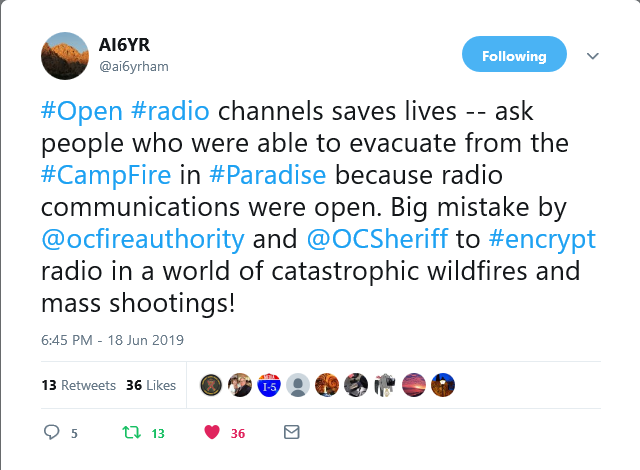