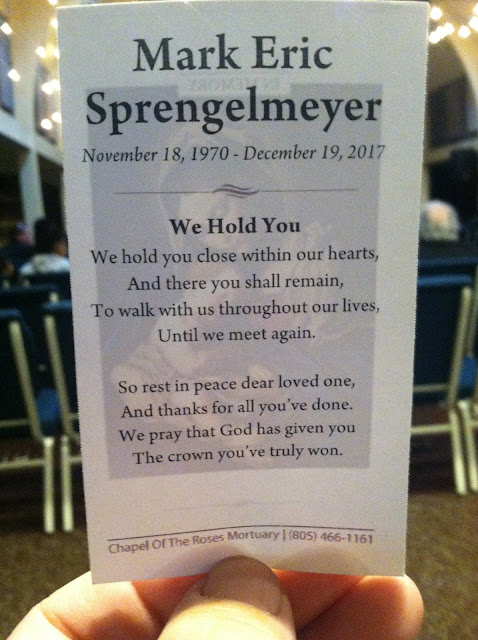 Today was the memorial service for Mark Springelmeyer whom I've known for several years now through the local Christian community. I knew OF him going back to the 1990s when I saw him as Big Taco Bell Guy walking up and down El Camino Real to and from work there over the years. Much later on I met him in person and worshiped with him at local bible studies and men's prayer breakfasts and Christian men's camps. 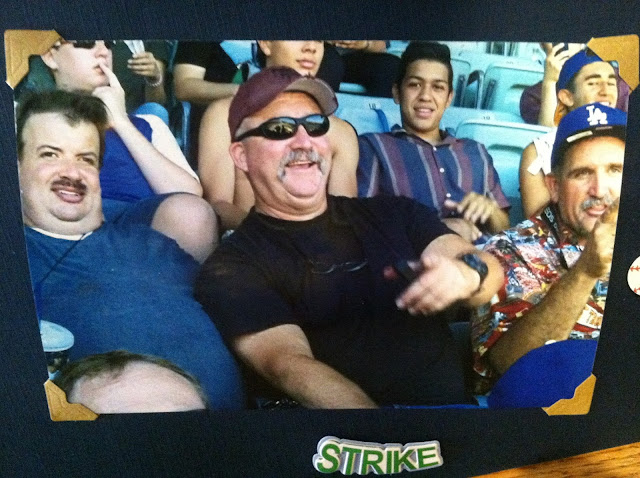 This is Mark (far left), my brother by another mother, Mike (center) and one of Mark's best friends and the one who found his body, and me at right on August 17, 2014, at Dodger Stadium in Los Angeles, for their Faith & Family event which I blogged about HERE. This was my first and only since then visit to that stadium and it was magical and Mark was part of that experience. If Mark seems a bit different, that is for a very good reason, during his first ten years of life, he was supposed to die more times than I can count on my hands but persevered through his dangerous struggles with hydrocephalus which deformed his head just a bit. Mark was a survivor and even now survives and flourishes in eternity, free of his meatsuit and encased in his new body. See you in a little while, Mark! Photos by Kim Patrick Noyes (all rights reserved).

Email ThisBlogThis!Share to TwitterShare to FacebookShare to Pinterest
Labels: in memoriam