A Day Trip to Southern California

Last month, on July 15, we took a day trip to Southern California to visit a place that has always been special to my mother and in the process take a drive down memory lane for the both of us and visit some of my old haunts growing up in Southern California. 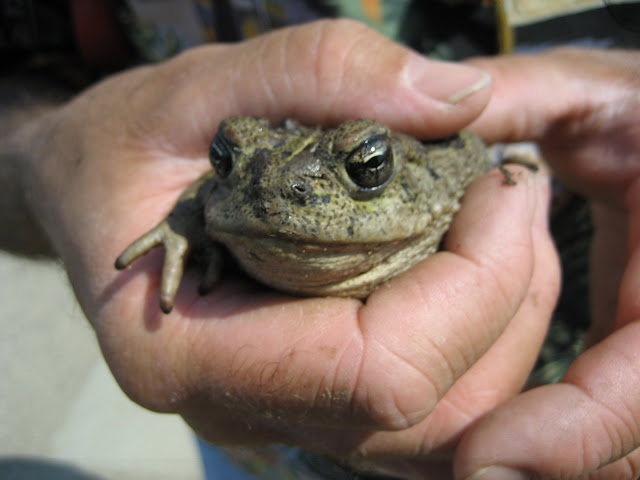 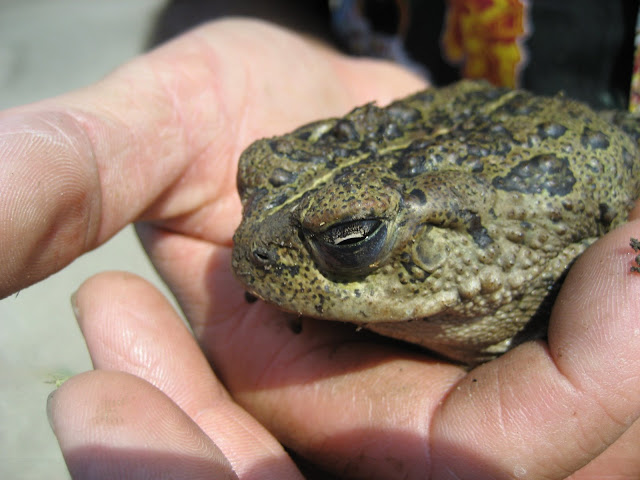 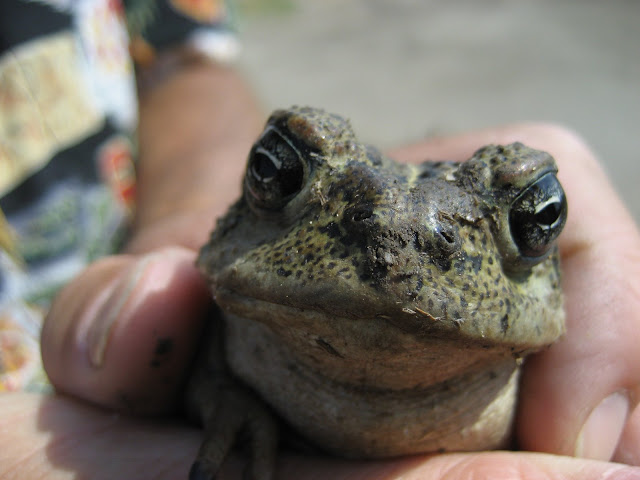 From Buttonwillow we proceeded east on Highway 58 to Interstate 5 where we then headed south down the Central Valley and over the Grapevine to Highway 138 which we took east into the Antelope Valley and paralleling the San Andreas Fault Zone.

At Three Points Road we turned south and took it a short distance to Pine Canyon Road.
In this area we encountered the aftermath of the Pine Fire which began four years ago a few days previous killing one firefigher and burning 17,418 acres and 3 homes and 21 outbuildings.
It felt strange being back after having not been down that way since the day the fire began.
On that day Mom and I had been driving in the Central Valley near Coalinga on our way to check out another fire caused by lightning that was up Los Gatos Creek Road northwest of Coalinga when we heard Kern County Fire Department do the first dispatch on the Pine Fire until they discovered it was in Los Angeles County Fire jurisdiction who took command of it although I believe Kern provided mutual aid.
We decided to drive down and check it out as we liked the area and had only recently started to visit the area and explore it being the geology buffs we are and the San Andreas Fault Zone trending prominently through the area.
Anywho, we had discussed going back down after the fire was out to check out the burn area but never got around to it until now. I kind of wish we had checked out the burn area when it was fresh as four years later is was not entirely clear what the final boundaries of the burn area were as grasses and lighter brush have grown back.
In the four-year-old burn area it was still quite obvious where some stands of digger pine had been toothpicked and beds of manazanita and chamise and sage brush had been moonscaped.
As always it was fun to drive alongside our old friend the San Andreas Fault Zone.
We took Pine Canyon Road to Elizabeth Lake Road with a quick break at the Angeles National Forest day use area at Elizabeth Lake.
As we headed down Pine Canyon Road/Elizabeth Lake Road we noticed rapidly building convection over the Mojave Desert and Transverse Ranges to the east and hoped we got into an electrical storm at some point in the day.
We picked up Highway 138 again in Palmdale, which sucked more than ever in the context of both the traffic and the home boys, and took it east to Highway 2 and up into Wrightwood.
On the way up the hill we encountered evidence along the side of the road and just off the road of recent monsoonal flashflooding of the more mild sort but nonetheless it was interesting to see after such a long dry spell.
We also noticed that dark monsoonal clouds were forming right over that entire area which was cool both literally and figuratively.

At Wrightwood we took a break and enjoyed being back in a town our family used to visit fairly regularly back in the late 1970's into the early 1980's.
To top it all off we concluded our visit in Wrightwood by visiting the Church of the Open Door's old Acorn Lodge property which looked better than ever. There even was remodeling work being done on the swimming pool area while we were there and it was clear somebody had been recently sinking a lot of money into the place.
This was nice to see as the last time we had been there in Summer 2002 it had been for sale and was in disrepair it appeared.
The capper was the thunder we heard right above our heads while visiting the old lodge. 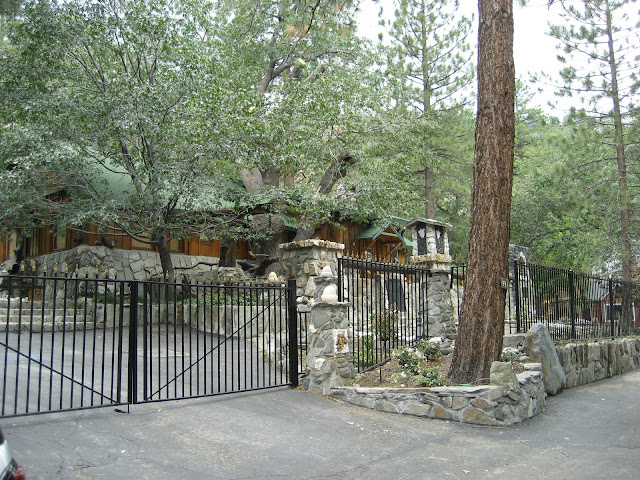 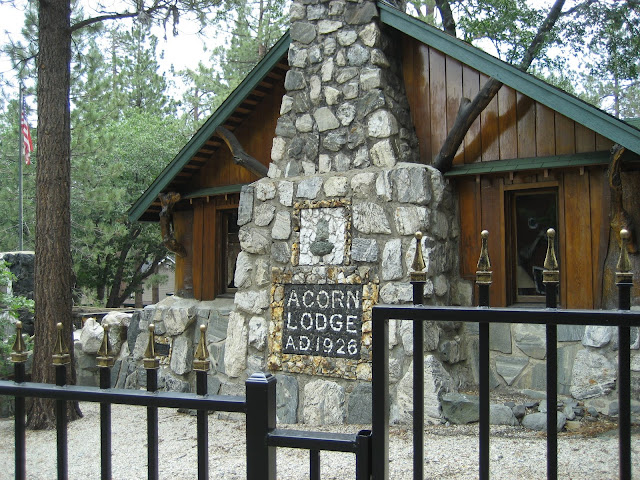 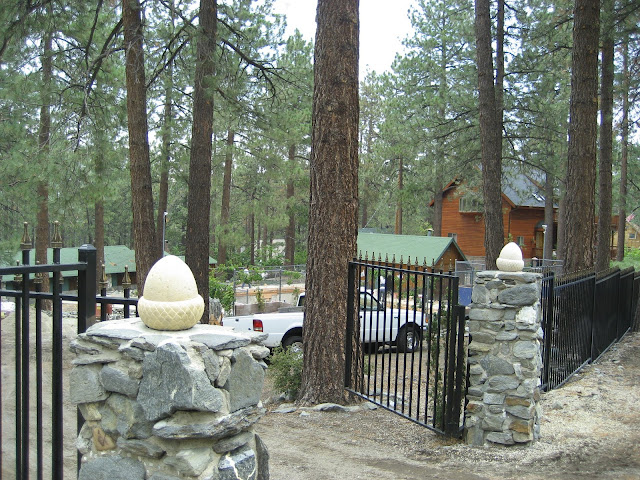 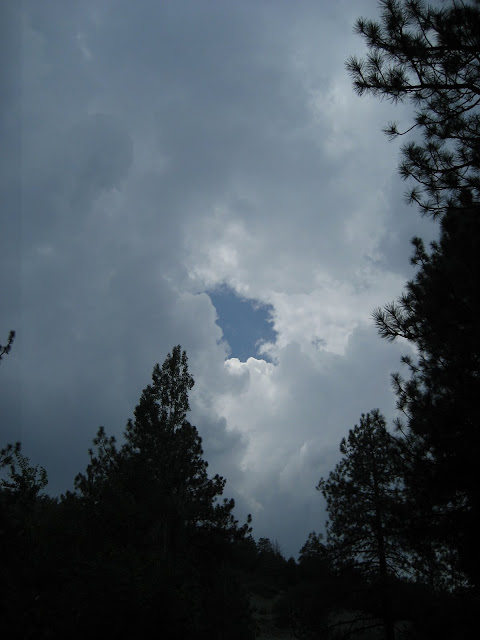 
After we finished in Wrightwood we headed back down the hill on Highway 2 and then east on Highway 138 down into the Cajon Pass and by the Morman Rocks en route to Interstate 15.
It felt weird driving down the Cajon Pass and looking down into the wash where I spent so many of my days rockhounding for actinolite.
It was also quite interesting to be back where the burn areas of the 2003 Grand Prix and Old Fires are located and this was the first time I had been in the Cajon Pass since checking out those fires a few days after they roared through that area.

We took Interstate 15 all the way down to Interstate 10 as I failed to turn east onto the newer segment of easternmost Interstate 210 in order to take it to Redlands and get on Highway 38 up into the San Bernardino Mountains.

After picking up Highway 38 via Interstate 10 we headed up through Mentone.
It was cool seeing those roads in Mentone named after minerals which I had forgotten about.
The roads in question are named the following and appear in order as one heads eastbound on Highway 38: chrysolite, jasper, opal, turquoise, tourmaline, beryl, olivine, malachite, and agate.

As we headed up Highway 38 we started looking for signs of a then-recent fire that burned near Mountain Home Village after starting up in the hills behind Yucaipa, but saw nothing.
We finally turned off of Highway 38 and onto Forest Falls Drive which we had not been on since our last visit in October, 2002.
At that time we were struck by how many brown, dying trees there were on both sides of steep Mill Creek Canyon and surrounding mountainsides.
This time we were struck by how relatively few brown trees there were compared to last time.
This time the trees that had been brown five and half years ago appeared to have become grayish-brown skeletonized trees with much fewer brown, dying trees in the mix.
My impression is that the then-ongoing big tree die-off that was a front page story in the local paper that very day we were last down there has at least in Mill Creek Canyon ended or slowed down dramatically which was nice to see.
We drove directly into and parked at our destination for that day: Forest Home Christian Conference Center. 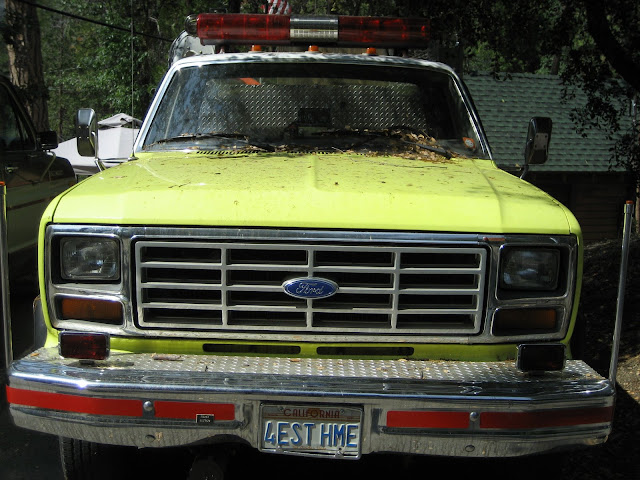 As we walked through the parking lot there of the main conference ground we encountered a type-5 engine belonging exclusively to Forest Home which was interesting.
It appeared to not be kept up very much if at all which is unfortunate. 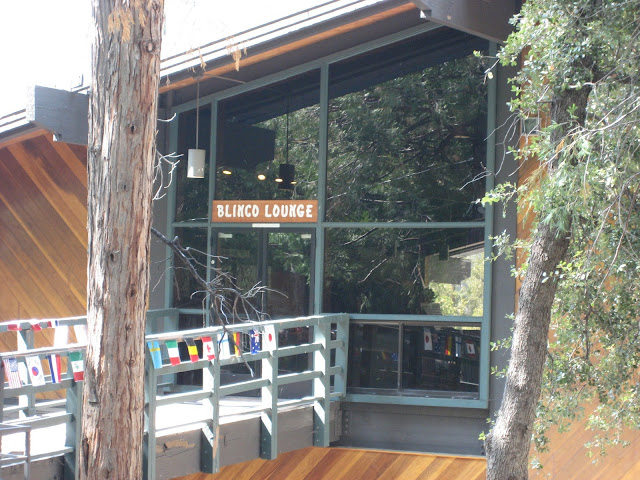 
Mom personally knew Joe Blinko whose name appears on at least one building at Forest Home.

Joe functioned as a surrogate father to her at a time she needed one desperately. 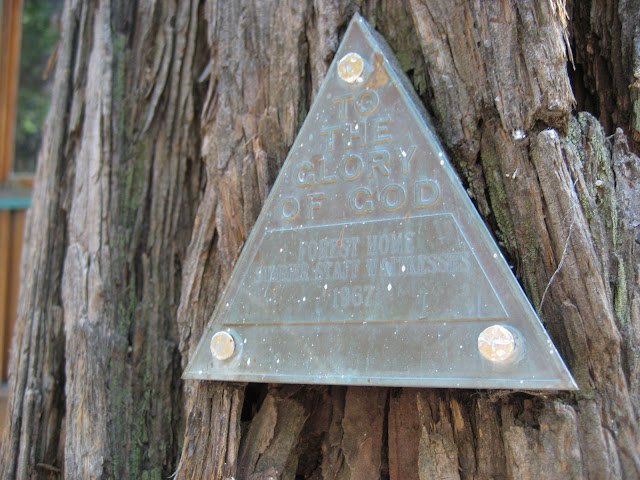 Metal marker placed on tree by waitresses of Summer '67.


Mom worked as a waitress at Forest Home over the course of the Summer of 1967.
Each year the waitresses from each Summer Camp session commissioned such a plaque that they placed on a tree outside the dining hall. 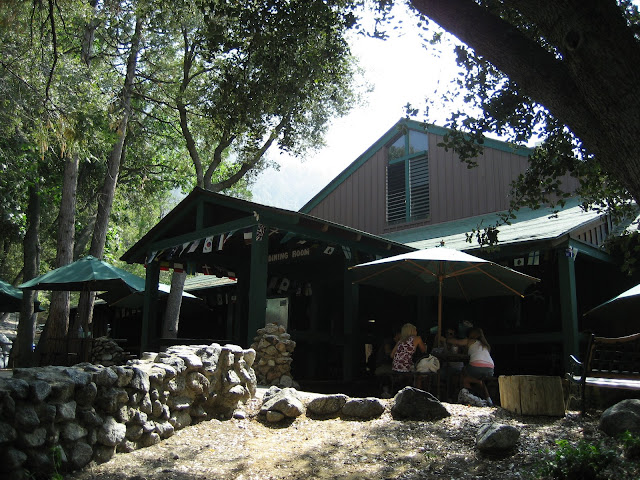 The Dinning Hall mom worked at in the Summer of '67. 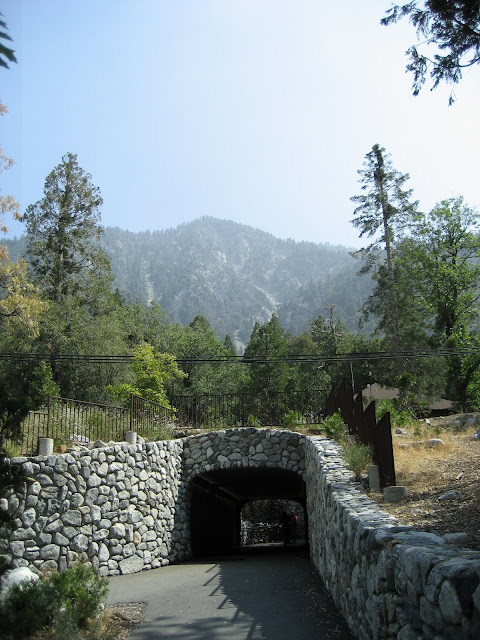 The cool tunnel linking both sides of the road at Forest Home.


At the far end of the tunnel in the photo above is a cool water fall which on this hot day was a God-send. 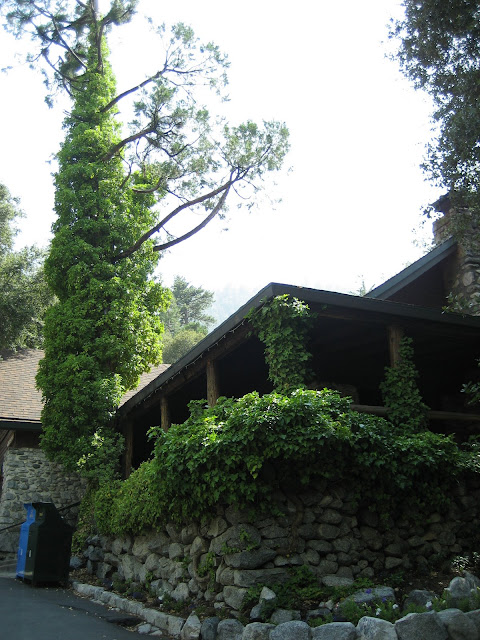 The coolest building at Forest Home. 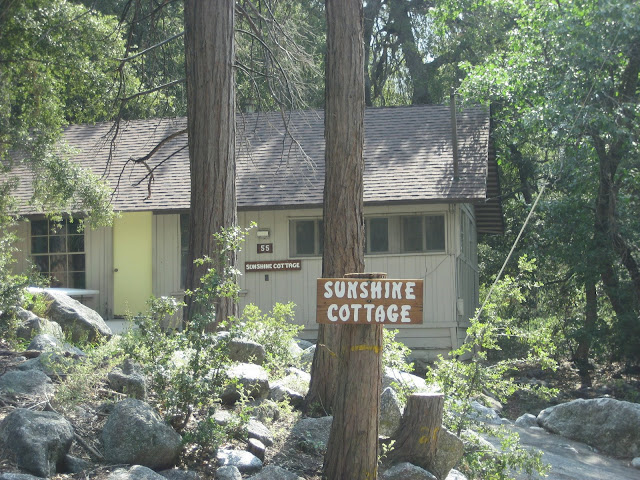 Sunshine Cottage where mom lived during the Summer of '67. 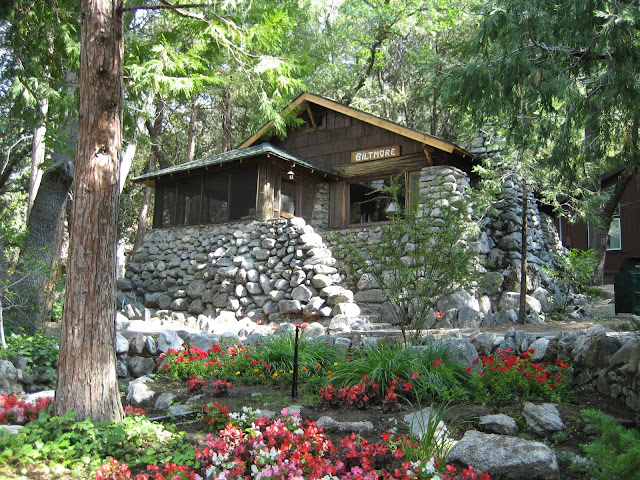 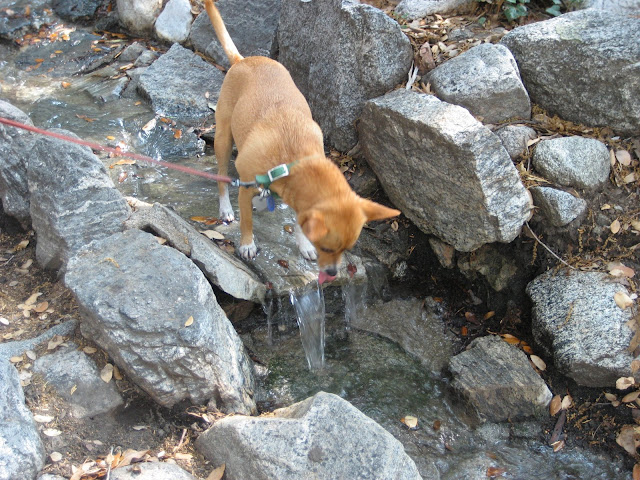 My little monster Tequila drinking at the doggy water bar. 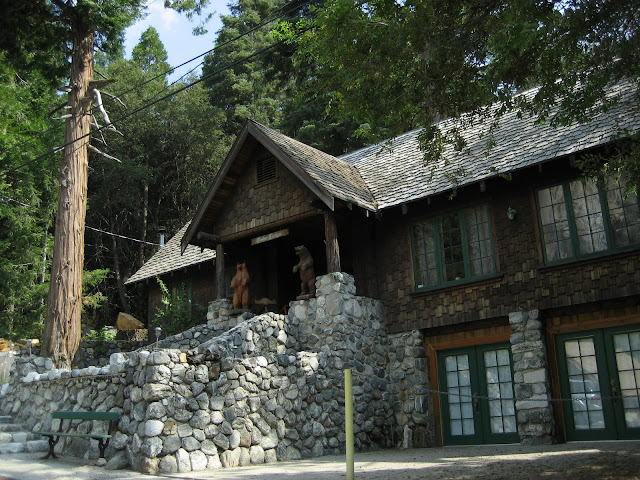 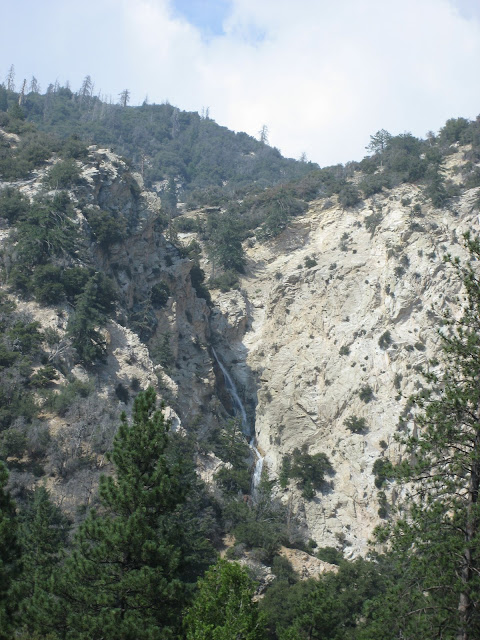 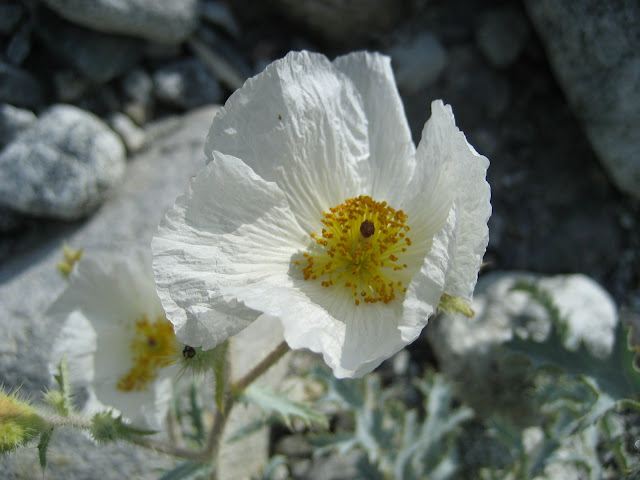 
We rockhounded in Mill Creek and found plentiful garnets imbedded in quartz. 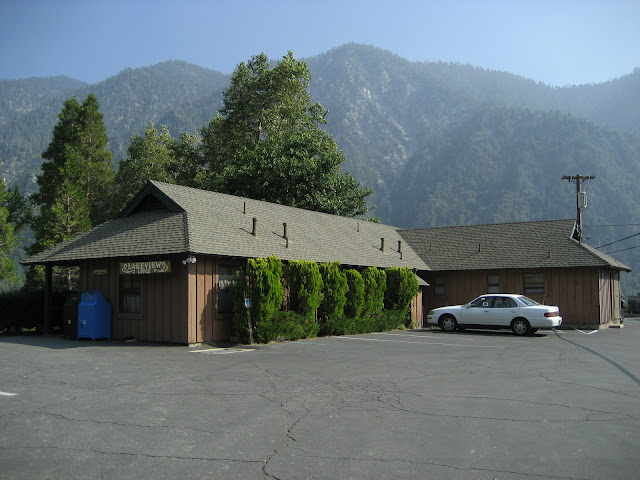 On this particular day the lake was shut down and looked a bit too green which might explain its closure. After visiting Lakeview we headed home via the route we took down to Forest Home.
One exception was we took Highway 166 west from Interstate 5 to Highway 33 and then took that north all the way to Highway 46 and on home the way we came earlier that day. 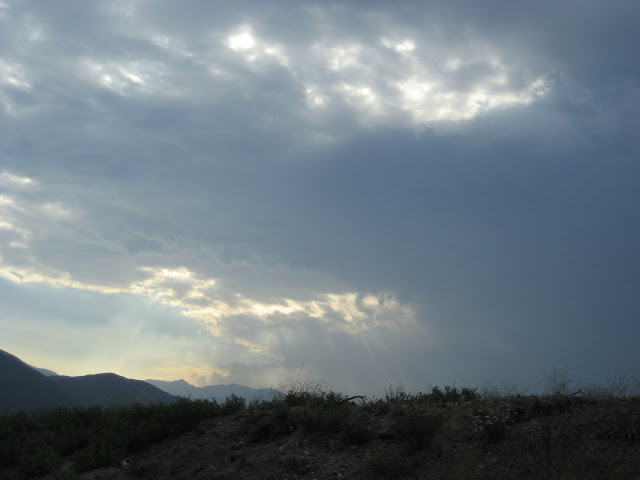 Thunderstorm brewing over Wrightwood as seen from Cajon Pass.


On the way home we encountered lightning over the Wrightwood area that was clearly visible from Interstate 15. The same cell complex produced flashflooding west of Wrightwood draining out of the San Gabriel Mountains and down into the Mojave Desert. 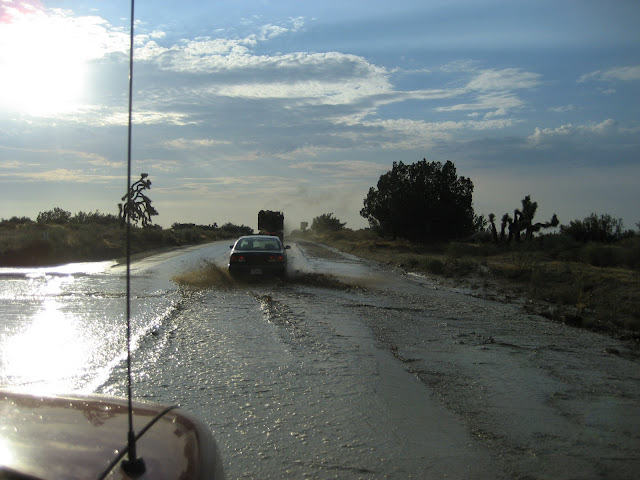 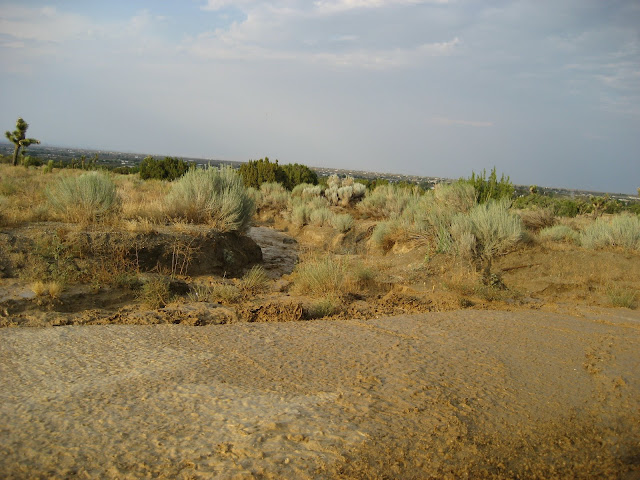 Flashflooding at Highway 138 near Llano. 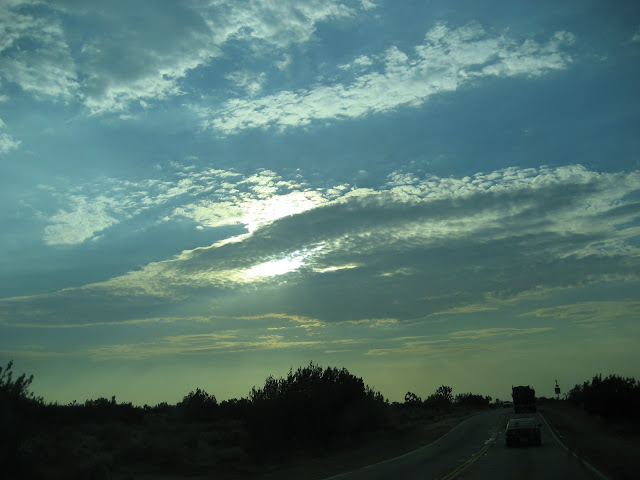 Monsoonal clouds over the Mojave Desert. 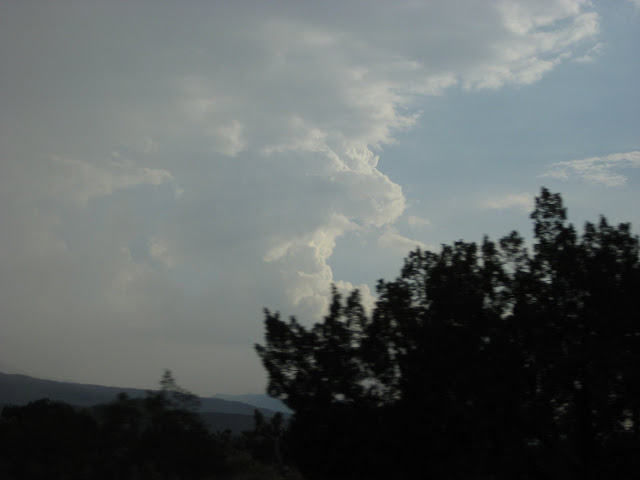 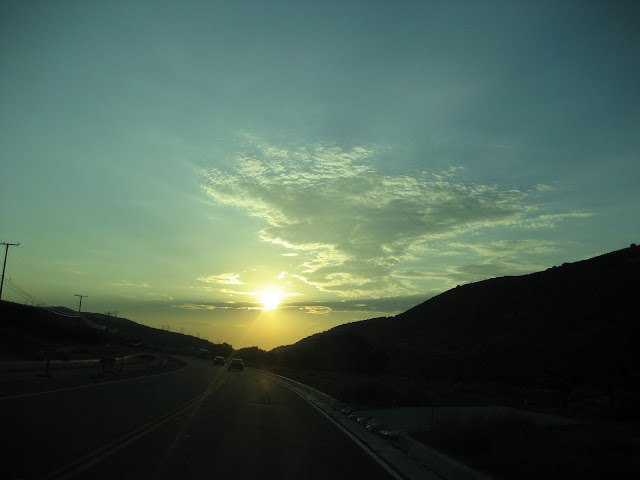 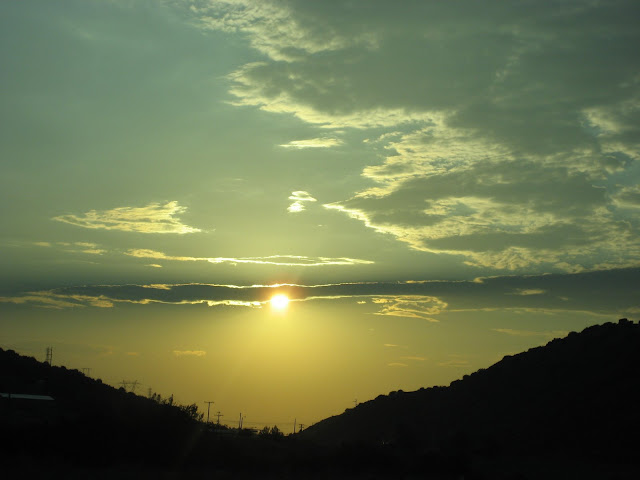 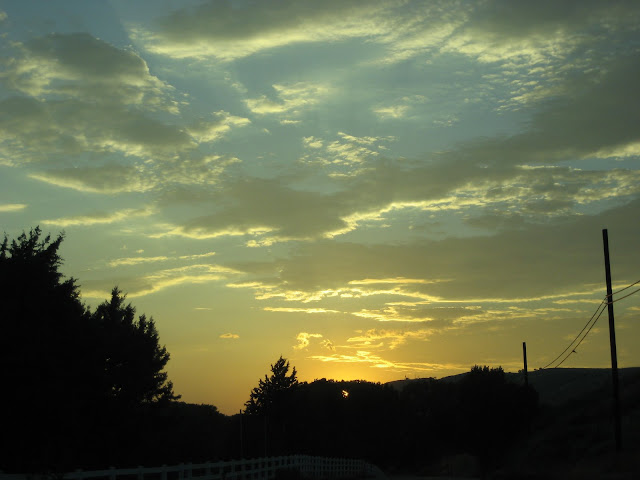 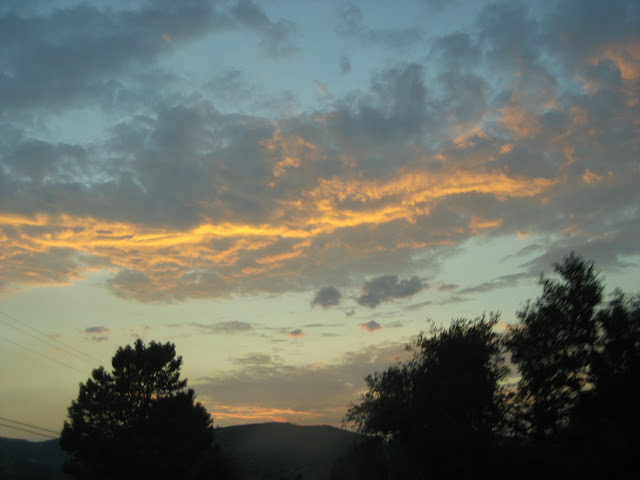 Sunset near the Three Points/Neenach area. 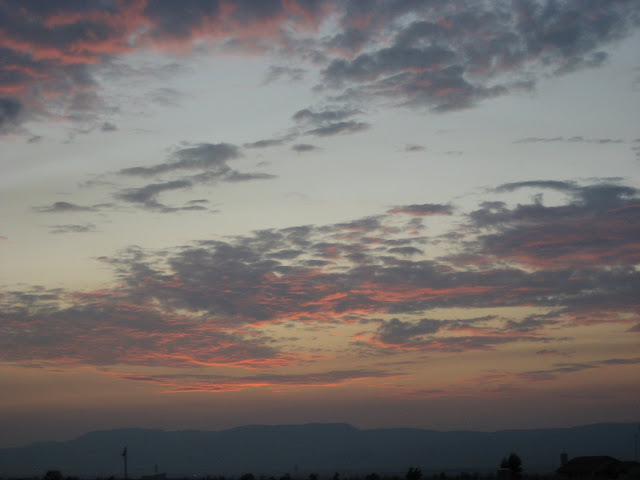 The day ended with a gorgeous sunset created by the monsoonal moisture interacting with the low-angle sunlight. We still had a couple of hours of driving after dark once the Sun set.
On the way home we were discussing tales of the supernatural and matters of a supernatural nature when as we approached the south end of Taft northbound on Highway 33 a street lamp we were about to pass under suddenly shut off in dramatic fashion which not only startled us but momentarily freaked me out as I was sort of psyched out by our discussion.


All in all it was a wonder day and a cool adventure and we were kept safe the entire time.