Quote of the Day - Lincoln

Email ThisBlogThis!Share to TwitterShare to FacebookShare to Pinterest
Labels: hoaxes and myths, Internet, quote of the day

Email ThisBlogThis!Share to TwitterShare to FacebookShare to Pinterest
Labels: government, graphic of the day, politics

Email ThisBlogThis!Share to TwitterShare to FacebookShare to Pinterest
Labels: geography, geopolitics, graphic of the day, maps

At Least I'm A Member of Phi Alpha Theta

Email ThisBlogThis!Share to TwitterShare to FacebookShare to Pinterest
Labels: wildfires

Not Out of Reach For Me

I recently rediscovered this progressive house gem amongst my bookmarks and enjoyed it last night. I finally realize it always belonged on this blog and somehow I forgot about it after initially discovering it some time ago. In 2013, Alle Wagt a.k.a. Allen Watts hailing out of the Netherlands, created this wonderful track "Out of Reach" which is remixed here by Aussie deejay Thomas Hayes.

Email ThisBlogThis!Share to TwitterShare to FacebookShare to Pinterest
Labels: artist of note, graphic of the day, science fiction

Graphic of the Day - Whose Got Nukes

Email ThisBlogThis!Share to TwitterShare to FacebookShare to Pinterest
Labels: graphic of the day, nuclear apocalypse

Two major wildfires broke out on the Angeles National Forest in eastern Los Angeles County this afternoon, about an hour apart. The more easterly now-1,500-acre Reservoir Fire began near Morris Reservoir in San Gabriel Canyon. An hour later, the now-3,000-acre Fish Fire began in the hills above Duarte, CA. The Mount Wilson Towercam is a wonderful way to watch wildfires when the operators are pointing it at a nearby wildfire. I learned this during the 2009 Station Fire. Below is an image from the Towercam captured during the peak of the fire's daytime activity and the latter image was captured tonight as the Strawberry Moon rose over the eastern LA Basin. Images courtesy of UCLA (all rights reserved).*Update: both fires were combined into the San Gabriel Complex overnight. Updated 6/21/16, 2:05 p.m. 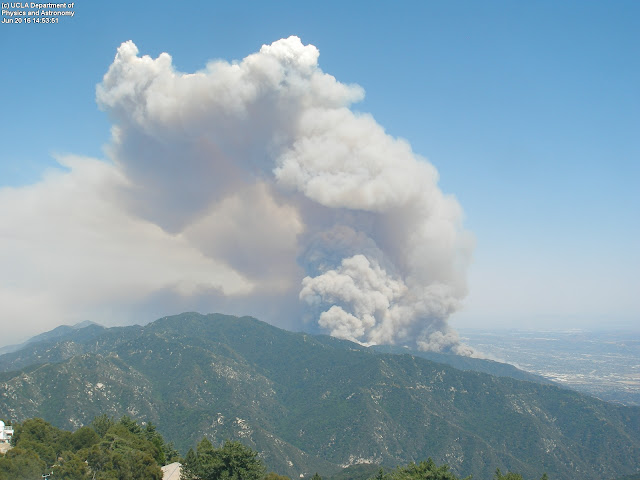 This weekend the San Luis Obispo Gem & Mineral Club hosted its inaugural Cambria Gem, Mineral, & Jewelry Show at the Cambria Vets Hall. This was the former Cayucos Gem, Mineral, & Jewelry Show relocated to Cambria due to the Cayucos Vets Hall being condemned a little over a month ago following an inspection by state engineers. A small, rag-tag segment of our already small club made the magic happen in Cambria, exceeding all expectations given the short amount of time to reorganize the relocated show in a new community 14 miles up the highway. What follows is my photo account of how the show floor looked today and an image of each our our beloved and mostly long-term vendors.

Pismo Beach Bonfire of the Vanities

This evening I indulged in a welcome respite from the constant rhythm of responsibility and crisis which has defined my past several weeks. I attended a beach bonfire gathering of friends and their friends at Pismo State Beach down on the beach itself, the world-famous one the public may drive out onto. The wind was initially brisk in route inland to feed the Sundowner Wind event which fueled the Sherpa Fire this evening in adjacent Santa Barbara County. Fortunately, the strong seabreeze calmed down after sundown so we could enjoy some fire-twirling by friends. It was a fun way to celebrate my buddy Blake's birthday as well as both our recent graduations from Cal Poly and reunite with some friends/acquaintances we both know from our Cuesta College days. Most meaningful was seeing our mutual buddy Kameron McMeekin whom we have not seen nearly enough the past few years. It was also really nice to see Lonnan and Britt McIntyre after too long a time. Oh, and now I can finally place Ashley Reika who better get back to blogging!

Email ThisBlogThis!Share to TwitterShare to FacebookShare to Pinterest
Labels: California Coast, picture of the day, wildfires

Email ThisBlogThis!Share to TwitterShare to FacebookShare to Pinterest
Labels: Cambria Scene, humorous, picture of the day

Picture of the Day - Chillin With Einstein

Email ThisBlogThis!Share to TwitterShare to FacebookShare to Pinterest
Labels: Cal Poly, picture of the day


Today Cal Poly held the first two of three graduation ceremonies. The university is divided into six schools and two schools walk in each of the three commencement ceremonies. I walk tomorrow with my fellow College of Liberal Arts graduates and the graduates of the Orfalea College of Business will walk with us. Today I worked crowd control for my company during the 9 a.m. and 4 p.m. commencement ceremonies. I was stationed up in the primary bleacher structure on the west side with the assignment to keep aisles and walkways clear per the fire code. Being positioned where I was I was ideally situated to observe the ceremony which was the third year in a row I worked the Cal Poly spring commencement ceremonies. Today's commencement ceremony attendees were treated to a most excellent speech by Leon Panetta. While I am not a Democrat and do not agree with him politically on many things and view some of the things he did working for the Clinton 42 and Obama Administrations as significant mistakes, I do recognize his lifelong service to my nation and my part of California in particular when he was a local congressman. I also must confess that he gave one hell of a commencement address not once, but twice today. I was duly impressed and must reassess my perception of him. Above, I have a recording of his afternoon address which received a standing ovation more so than after the morning performance of it. I regret that he will not be speaking during my commencement ceremony tomorrow which will be keynoted by somebody else.
Posted by Kim Noyes at 11:59 PM No comments:

Tonight I am at home alone recovering from my recent bout with either bronchitis or pneumonia as well as the effects of finals (which I completed Tuesday) and senior project (which I completed Thursday of last week) at Cal Poly as well as caring for and caring about a dear Loved One's brokenness. I feel utterly drained and a bit anti-social. In fact, I keep entertaining the idea of ditching my graduation ceremony at Cal Poly this Sunday and just going to the beach alone. However, I know I would regret that decision were I to chose that option so I plan to walk Sunday. I feel a bit discombooberated after all I have experienced and endured over the course of my journey, especially the past two years at Cal Poly and more so this just-ending spring quarter. For the first time in my life I feel middle-aged and I hate it. It feels like too many things have hit me in too short a period of time.

The past two years at Cal Poly have been an amazing experience that has helped me to grow as a man and broadened my horizons. I have been forced to reassess some of my opinions and realizations and make improvements, while other opinions and realizations have merely been reinforced. While at Cal Poly I did not join the Rose Parade float team as I had originally planned, but I did become a member of Phi Alpha Theta. I made some new friends at Cal Poly including one of my professors. While I did not find my wife at Cal Poly or even acquire a girlfriend, I did manage to maintain a celibate lifestyle and keep myself sexually pure in a sexually-charged environment. Of course, it helped I was a fat-forty-something living off-campus for the duration, but still. And yes, I became a Fat Fuck at Cal Poly. Between graduating from Cuesta College in mid-May, 2014, and starting at Cal Poly in late-September, 2014, I lost 25-30 lbs. Over the following two years I quickly gained that back and doubled it up to a 50 lb.+ weight gain. I seem to have fallen just under a 3.5 GPA for my Cal Poly undergrad career.... too many otherwise good papers turned in late caught up with me too many times and I let some A's get away from me.... my bad.

However, I also had a lot of distractions in my private life with the aforementioned Loved One's struggles not helping my already difficult time dealing with my chronic procrastination problem. This two-pronged assault on my GPA began in the Winter of 2015 and kept up right into this week. If this continues either I won't graduate from grad school next year or my Loved One will have to find somebody else to help them if they fall again. Have I been helping or enabling or a bit of both?

I don't know what to expect with what comes next: Cuesta College summer school health ed class (Health 202) to satisfy a requirement for the teaching credential program that I did not get fulfilled at Cal Poly. At least this will be one less unit and a thousand dollars cheaper than had I completed it at Cal Poly. However, I shall have to drive (or ride the bus) to Cuesta College main campus in SLO for six weeks, starting next Tuesday, three days a week (Tuesday-Thursday, 9 a.m.-12 p.m.). After that I will have to return to Cal Poly a month earlier than other types of students because I will be doing in-class work at Atascadero High School with my master teacher Ben Tomasini. We will take classes before the local schools resume classes so that means going back to school mid-August instead of late-September. Fall 2016 quarter will be 16 units PLUS some in-class time each week with our master teacher. I hear it will be the roughest quarter of the grad program.

God is sovereign, God is in control. God knows what I'm doing, I do not. I'm just trying to be a good soldier of Jesus Christ and let the chips fall where they may. I have come a long way, yet have such a long way to go. I am merely an explorer and sojourner here; life is fascinating, but so very ephemeral. May God protect me from the storms to come!
Posted by Kim Noyes at 11:34 PM No comments:

Today I needed a break from being home alone, sick with pneumonia and some sort of weird eye inflammation (not red eye) and recovering from the emotional toll of two weeks of family turmoil right during the last leg of the quarter and my Cal Poly undergrad career. The moment I became aware that a new wildfire (Coleman Incident) had broken out on the post of Fort Hunter Liggett following on the heels of the still-burning 3,000 acre Stoney Fire nearby, I grabbed my dog, my meds, and my camera, and got in the car and went firechasing for a few hours. I headed north on US101 and then headed west on Jolon Road and followed it all the way to Pine Canyon Road where I captured the following images prior to firefighting assets making their way into the area as they began to do as I left to head home. By the end of today's burn period the fire was reported to have consumed 2,800 acres and some projections suggest it might ultimately burn 30,000 acres.
*Note: updated 6/05/16 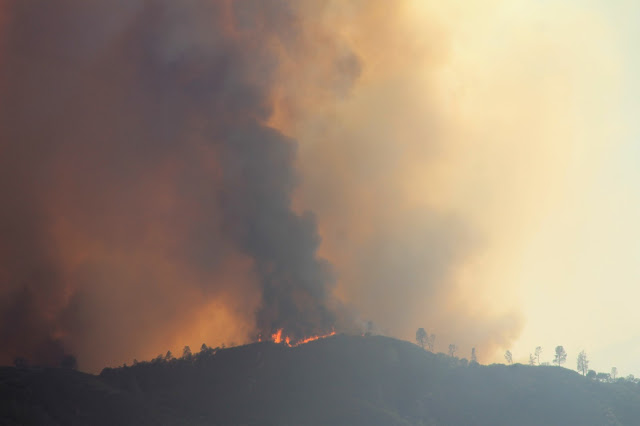