Setting Off a Pink Bomb

This track "Pink Bomb" by Indica a.ka. Space Buddha a.k.a. Eliad Grundland who was a great late 1990's pystrance trance which was the Golden Age for that subgenre. Crank your speakers and enjoy... fastforward to about the one minute mark or 1:10 mark. I first heard this track and was transfixed by it about 2001 when I heard it in Ministry of Sound's 2000 Trance Nation America compilation CD Disk One which was a seminal period in my life for my inner healing and my then-nascent love affair with trance music. Note: I am not excited about the intro to this for the first one minute and ten second so fastforward to 1:10 and listen with the speaker cranked up to full. The drops on this are pretty phenomenal.

Email ThisBlogThis!Share to TwitterShare to FacebookShare to Pinterest
Labels: music

Email ThisBlogThis!Share to TwitterShare to FacebookShare to Pinterest
Labels: death, in memoriam

Genesis Days as Thorns in the Flesh

Email ThisBlogThis!Share to TwitterShare to FacebookShare to Pinterest
Labels: meme of the week, theology

I encountered this track ("Nightfall") and accompanying timelapse video a short time ago as a result of a Google+ notification regarding a new release. I initially delayed checking it out for awhile but did so just now for a mental break from an upper division history class research paper rough draft I'm working on tonight. I'm underwhelmed by the track itself while overwhelmed by the video which is jaw-droppingly beautiful and features the city of my nativity: Los Angeles, CA. Enjoy!

Don't Burn This... It Has Fire In It Already

A few weeks ago while traveling through Southern California I listened to the following most extraordinary account on National Public Radio's local affiliate KCRW. I have been haunted by the story of Dang Thuy Tram ever since. Her story is both breathtakingly beautiful and soul-crushingly sorrowful... contradictions in orders of magnitude seldom achieved outside of wartime. You may read about this story involving not only Tram but her surviving Vietnamese family and more recently adopted American family HERE. Below is a player for the half-hour broadcast that everybody would do well to hear.

Quote of the Day - "Admiral Adama"


I tend to be rather pro-law enforcement... even through these police shooting stories that get many Liberal's panties in a wad. I have always gotten along quite well with the constabulary even when I was getting pulled over a lot when I drove my meth-mobile-looking beater Volvo until earlier this year. They have a tough and often dangerous job to do and the haters often overlook that part of the story.

That being said, there has been a disturbing trend since 9/11 and the Homeland Security Act: the rapid militarization of our constabulary. Both Liberals and Conservatives alike as well as those from the Center like me view this with varying degrees of trepidation. This trend does not reflect any realities of crime or terrorist activity in our society. It often manifests itself in the heartland interior in even small podunkvilles. Departments of all sizes across our land are beefing up their military-styled SWAT programs and acquiring surplus military equipment like armored personnel carriers. This is driven by greed as homeland security is big business for Big Business. It is also a way for governments to get bigger because they are bureaucracies which tend to have an insatiable appetite for self-perpetuation and accumulation of money and power

However, at what point does our own constabulary no longer serve us but instead serves other agendas? Today we have Gramciian hegemony (Money Power controls indirectly and subtly through proxies and exerts force just under the surface all the while making limited concessions which the masses are content to accept). Does this arrangement metamorphose into something more malevolent down the road?
Posted by Kim Noyes at 10:19 AM No comments:

Email ThisBlogThis!Share to TwitterShare to FacebookShare to Pinterest
Labels: minerals

The Mustang Has Lost Its Way!

Today on the campus of Cal Poly there was the largest protest in recent memory. It featured faculty and supportive students to go along with some union reps to properly stir the pot. The details of this dispute I shall refrain from getting into here in too much depth. However, believe you me that the instructors have a valid complaint to make as administrators have been increased dramatically (in both pay and new hires) during a de facto pay freeze for faculty the past several years. At the same time student fees have increased 41%. Students are essentially paying for administrative hires and raises while faculty fall behind when inflation is taken into account.

I know a professor on campus who is the world expert in his particular field. Despite this, he is not even placed on tenure-track and is kept on as a mere "lecturer" which saves the school boatloads of money for admins at the expense of this man's two children. He pulls in somewhere in the $30,000's a year despite his heavy class load responsibility and continued need to be published (publish or perish). Janitors on campus make similar wages which is perhaps appropriate but PhD professors should make more than janitors. The following images I captured as I attended in support of my instructors. My wingman Blake likewise attended in support and appears in some of these images as well as some of my instructors. 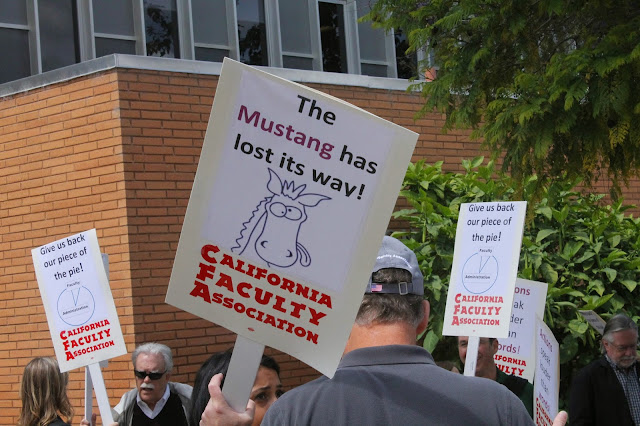 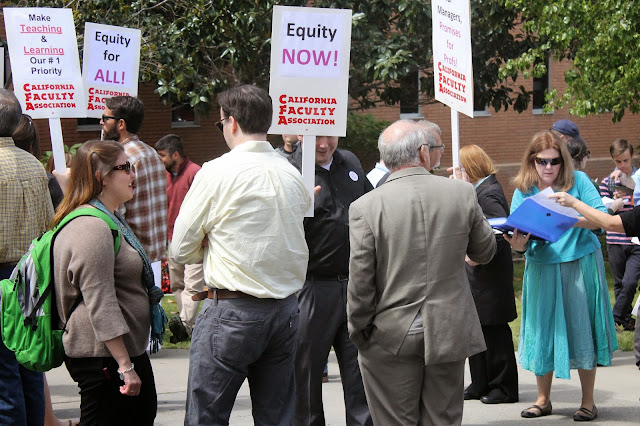 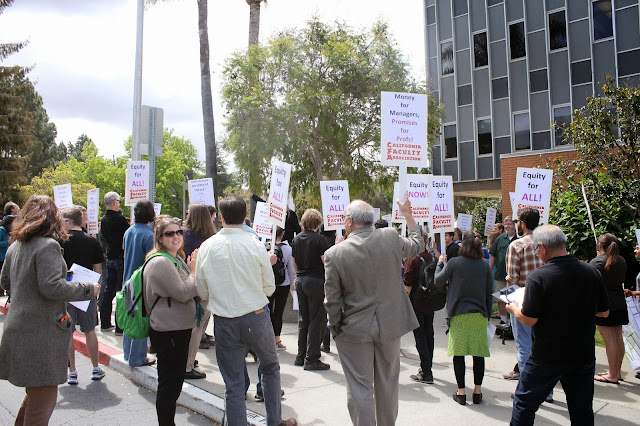 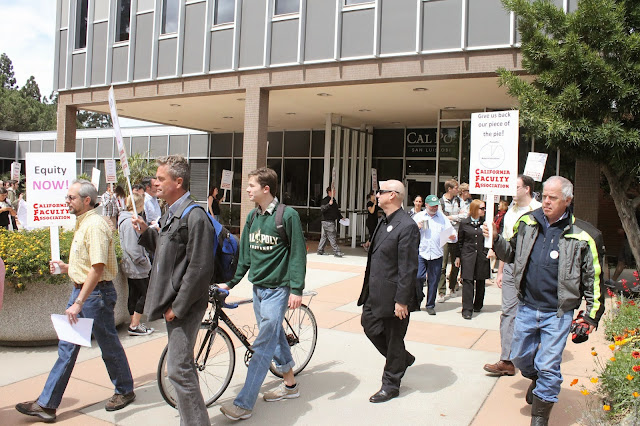 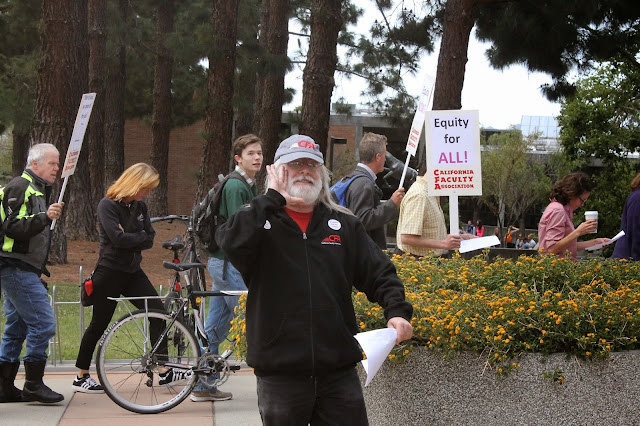 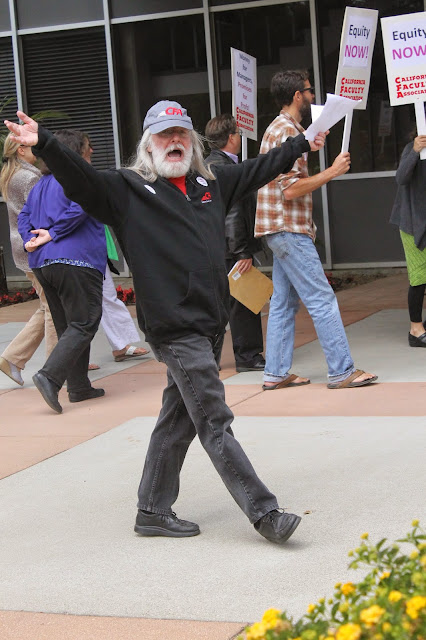 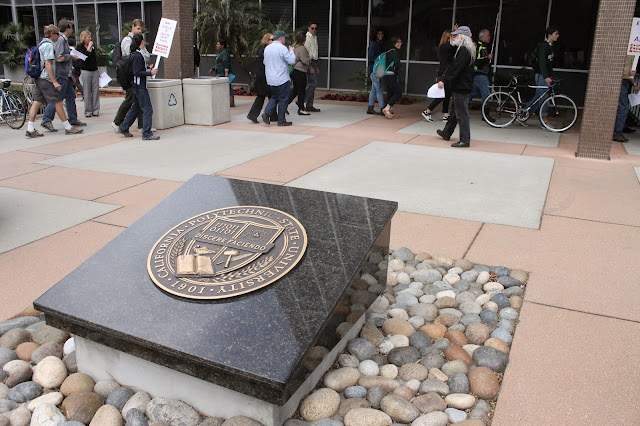 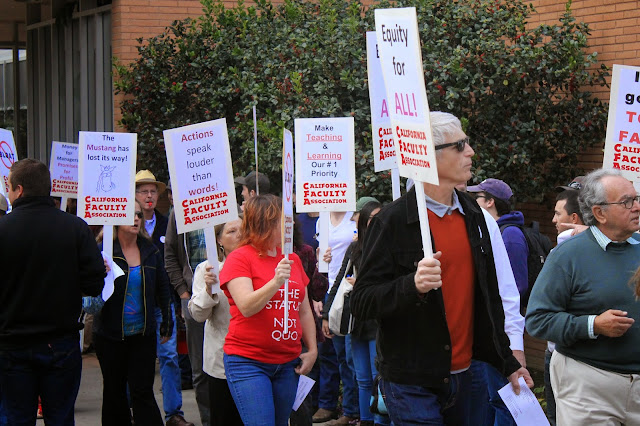 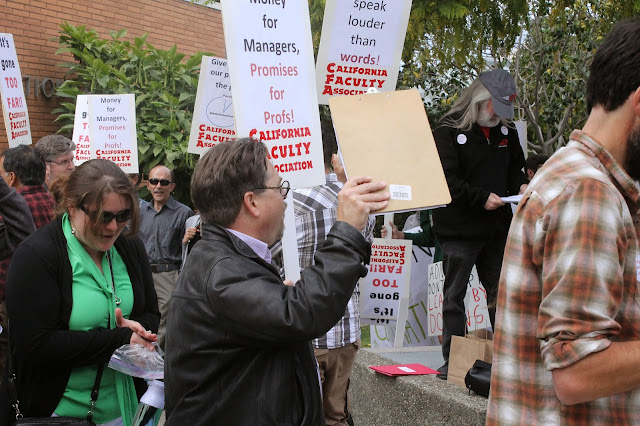 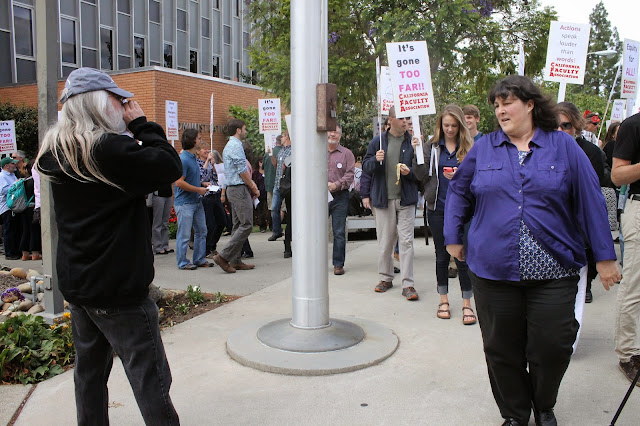 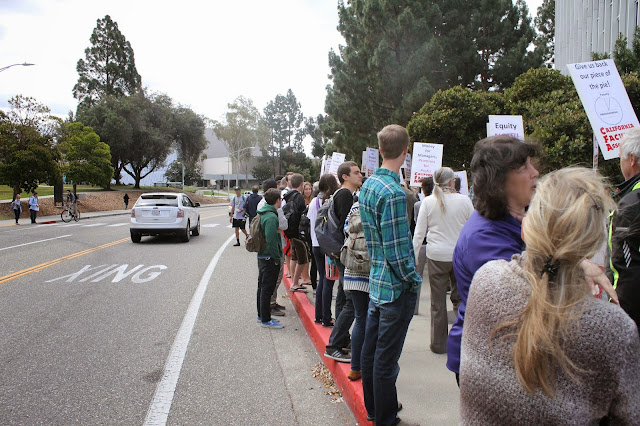 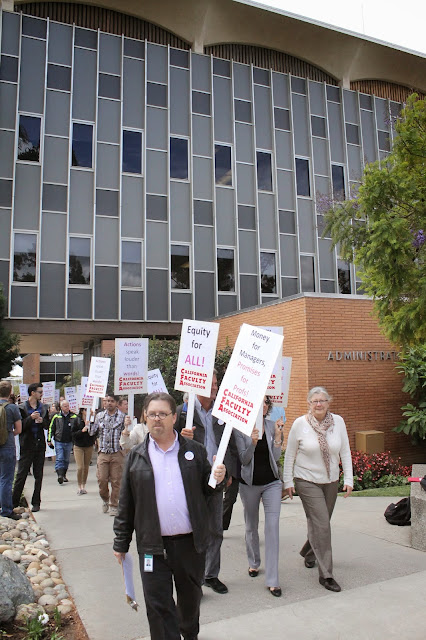 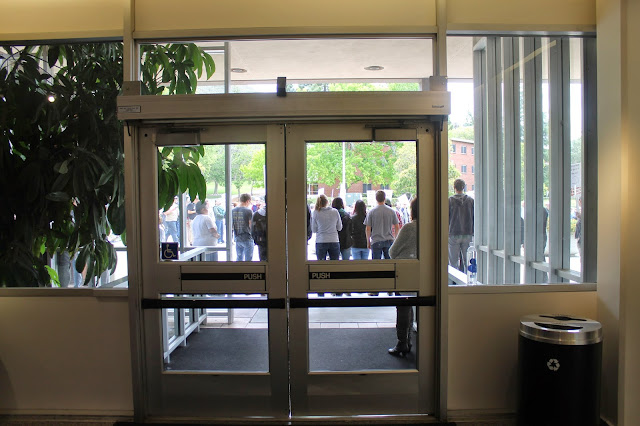 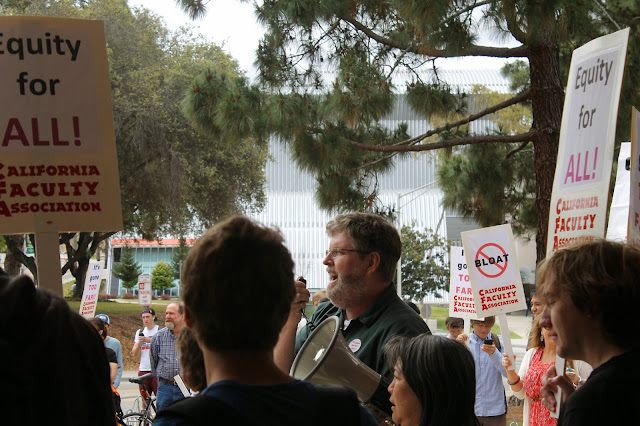 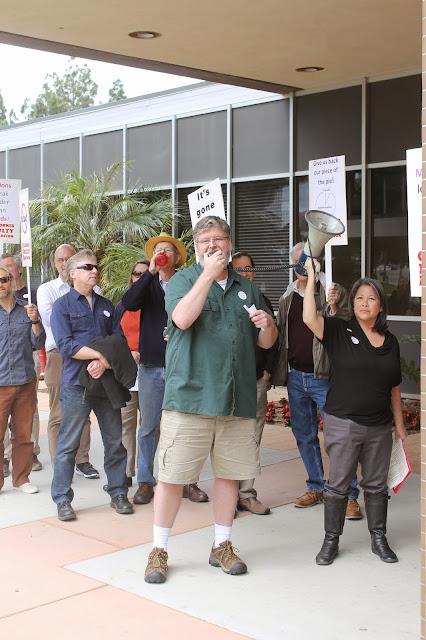 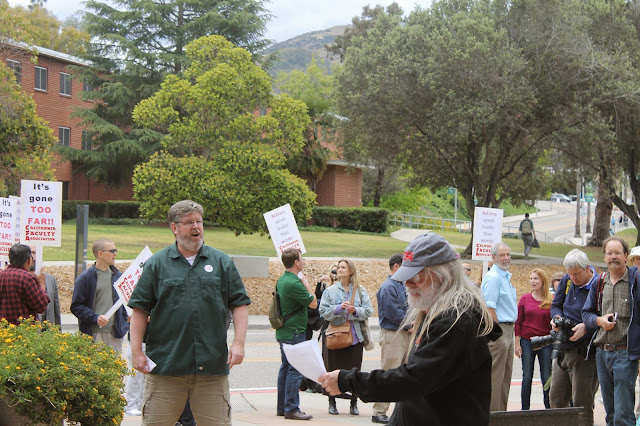 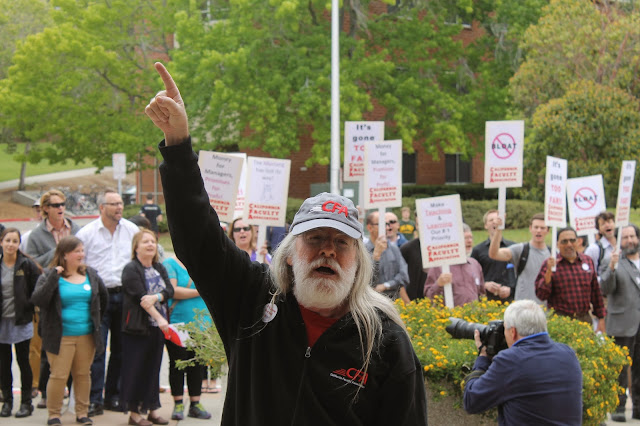 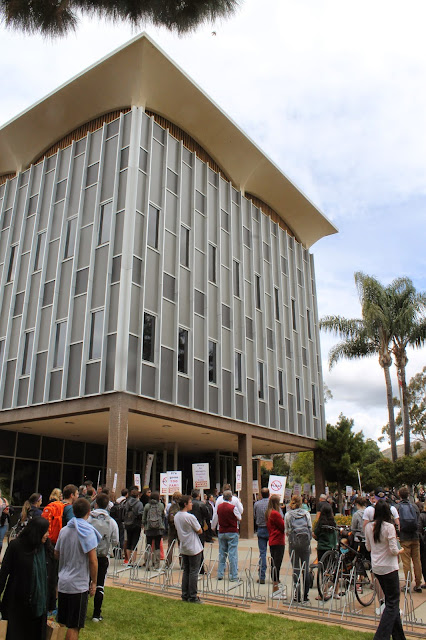 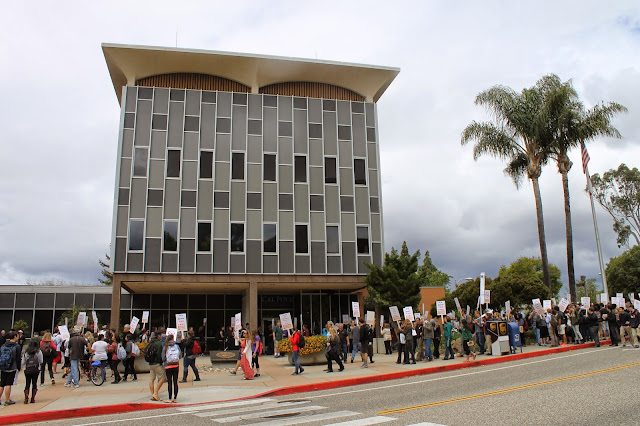 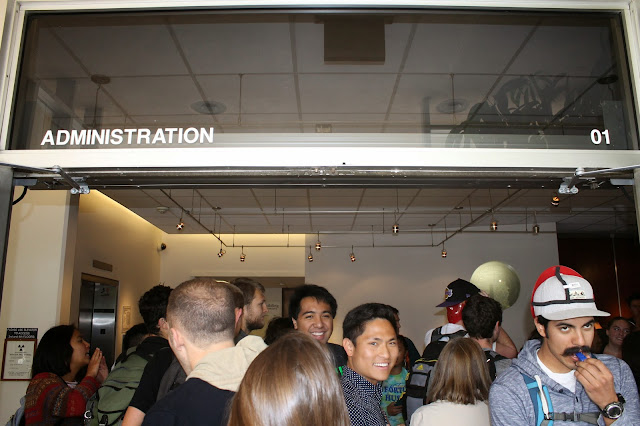 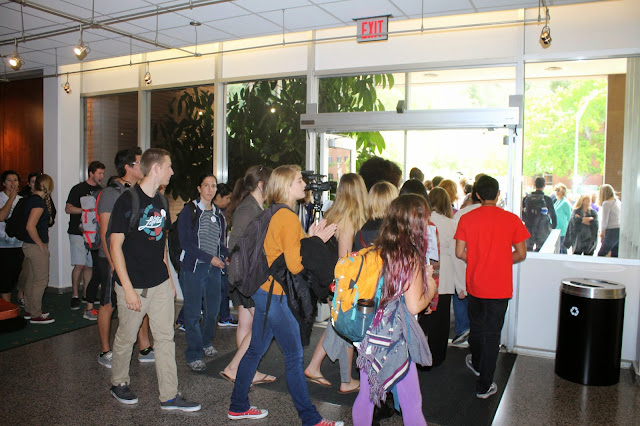 Of Animals And Hippie Chicks

This afternoon I tagged along with my buddy Mike and his family for an afternoon excursion over to the coast and captured some photo-worthy sights. After viewing elk near San Carpoforo Creek we stopped by the elephant seal rookery before finishing with dinner in Morro Bay.