I find this Yosemite National Park webcam image sequence of the Meadow Fire rather fascinating as it captures the big blow-up earlier this month on September 7, 2014, as a wind event blew through the park and whipped up a smoldering lightening-started fire which initially innocuously began on July 19, 2014. For nearly two months it had been left alone to naturally clean the understory as fire has done there for eons during interglacial periods like now. Big thanks goes to my sister by another mother, Lin Kerns who compiled this sequence for me to share here.

This being the end of September 2014 and the Northern California Summer Fire Siege of this month also being pretty much wound down I am continuing to clean house in my computer. I am posting images I have been putting off sharing here due to other concerns distracting me such as that pesky old Cal Poly class workload. Anywho, here is the first in a trio of Yosemite National Park webcam photo sequences of the recent Meadow Fire blow-up on September 7th. Given that Yosemite IS Yosemite, just about anything there seems or is more beautiful and/or dramatic-looking than it might otherwise appear to be most other places... wildfire being no exception. Below is a series of images from the Turtleback webcam in Yosemite Valley showing the big blow-up of the Meadow Fire on the day of the aforementioned big wind event. Big thanks goes to my sister by another mother, Lin Kerns, who compiled this sequence for me to share here.

I didn't originally save all but one of these images in my computer but my mind sure did save them searing them within it. Before the Boles Fire in Weed, CA, or rather, OF Weed, CA, gets any further in our mental rear-view mirror I wish to share these remarkable images here. I'm somewhat familiar with this town having often stopped in it headed up and down the Interstate-5 corridor or turning off or onto it there from Highway 97 in route northeastwards back in my wandering daze.. er, days. Below are six images that to my mind's eye are the six most powerful and most revealing images from this recent disaster and shown here in the order they were taken as near as I can determine.

The following images show this month's Meadow Fire in Yosemite National Park as viewed from satellite as well as two satellite images of the King Fire on the El Dorado National Forest near Pollock Pines, CA. Again, I'm clearing out my download cache since these fires are pretty much done burning and a new month is upon us and these fires are going to remain September 2014 news if we don't have a Diablo Wind event whip them up next month (these fire will continue to smolder until it snows on them). 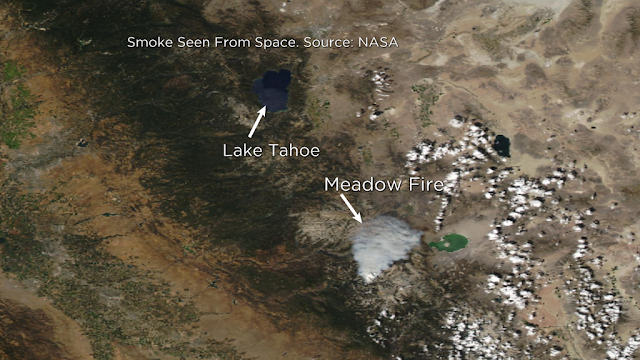 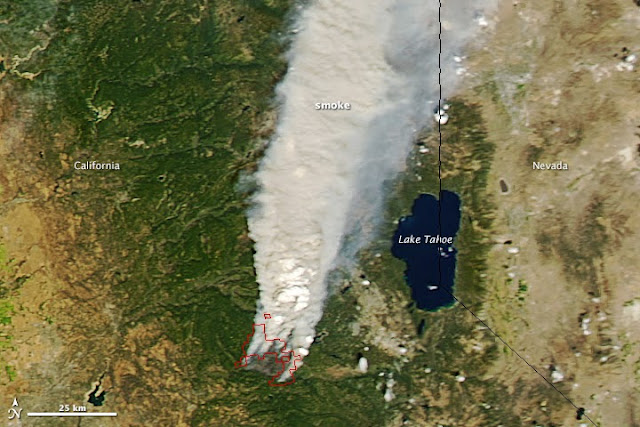 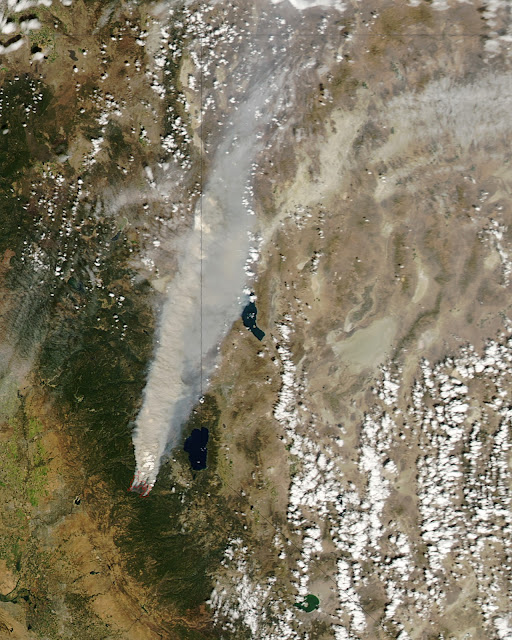 In keeping with what I said in my previous post about wanting to wrap things up with some of the topics that have received a lot of treatment here this month, ergo, Northern California wildfires, and given the Northern California fire season appears to be winding down barring any sort of Diablo Wind event whipping up a fresh fire siege and September 2014 is nearly over I want to clear out my photo cache of images I saved to share here but heretofore have not. These images are from the recent Meadow Fire in Yosemite National Park.

As the King Fire in California's El Dorado County (which began two weeks ago yesterday) comes to a close along with the merry month of September 2014 it seems apropos I clear out my download file of images I saved to post here but heretofore have not. Before this fire becomes old news any more than it already is here are five great shots of it from various angles and contexts and photographers.

Unlike last yea's rich treasure trove of MAFFS Go-Pro camera cockpit windshield-view-forward footage of Rim Fire retardant drops there was only one such video captured and shared with the public this year and here it is. I do not now which MAFFS bird this is but I do know it is a drop made on August 2, 2014, on the lightning-started 13,153-acre Day Fire in Modoc County. To see the aforementioned MAFFS Go-Pro camera footage from last year just check out the labels at left for "aircraft imagery" and/or "GoPro footage".

Just as the King Fire is nearly done so is Eclectic Arcania with discussing it as it feels like it is nearly time to move on to other topics. I have been rather obsessed with this fire the past couple of weeks as it has been burning in a general area that has long been near and dear to my heart: I nearly moved there in the 1990's. Below is a cool nightvision view of this fire that also shows a fairly active nocturnal thunderstorm further south along the Sierra Nevada.

I have now reviewed all the currently available online videos of the early hours and extended attack phase of the King Fire in El Dorado County from Saturday, September 13, 2014, or two weeks ago tomorrow. Currently, this fire has consumed over 96,000 acres and 80 structures including 12 homes. It is currently winding down given favorable weather conditions over the past week or a little more. This video is the most effective of the batch I've viewed of capturing what it is like in the early hours of a major fire that is getting away. This phase is always the most interesting given the incident is not a controlled one with all evacuations that are needed having been completed and all necessary resources having arrived on the fire. Perhaps it is just my own imagination but in the midst of this sort of situation always without exception there seems to be a sort of subtle, but occasionally disquieting hush as both man and nature seem jointly shocked at what is unfolding. The hush is not entirely or always an aural one but partially a behavior and mental one as both man and beast cease their usual activities and respond to the dramatic change in their environment even if that is merely to watch and be on alert. This footage was shot along the Highway 50 corridor in the Pollock Pines area perhaps a couple of hours after the fire began nearby.

I only just discovered this image a few hours ago and was blown away by it despite being a bit jaded by all the images of the King Fire in El Dorado County which I have seen since its advent over a week ago. This image was captured from a passenger jet passing over the Big Blow-up of the fire on September 17, 2014, in which about 50,000 acres burned in just several hours in one of the fastest-burning forest fire blow-ups ever observed. For the uninitiated viewing this, the whitish storm clouds in the image are actually pyrocumulus clouds forming atop the smoke coming off of the firestorm. Photo by Jordan Katz (all rights reserved)
Posted by Kim Noyes at 1:11 AM No comments:

Yosemite National Park's Meadow Fire has now effectively lived out its life. Somehow I missed seeing this on my friend Lin's Roxxfoxx blog until tonight but here it is better late than never on my blog. Thanks Linsis!

My Top 10 Cal Poly Observations From Day One

Today was my first ever day attending any university. That is a big deal for anybody but it seems to me that at age 44 that adds at least one extra order of magnitude of "big dealness". Of course I am at least slightly self-conscious of my age in that youthful environment. Nobody accuses me of being or treats me like I'm an old fogey. My insecurity is wholly internal, of course. Personality-wise I have the youthful playfulness and vigor and enthusiasm and mischievousness of a 22 year-old all the while I seem to have a deep understanding of people and the human condition, a street-savvy world-wiseness,  command of our language, PhD-level body of knowledge that crosses through several disciplines and the conversational acuity of someone my age (or even older as I have been accused of being an "old soul").  This has worked to my advantage at Cuesta College where I ultimately evolved into a veritable "Bull in a China Cabinet" (not in a bad way whatsoever). I pretty much had free run of the place both in class and out. I ended up feeling too comfortable by the end of my run there. Being at Cal Poly is important for me for not merely educational and career reasons. It is an important part of my evolution as a man. I am now a smaller fish in a much larger pond. I'm temporarily outside my comfort zone and this is forcing me to grow which is what I need.

As might be expected today, I observed/experienced some unexpected things or unexpected magnitudes of things I had already expected coming into today. Below is my Top Ten List of them.

Email ThisBlogThis!Share to TwitterShare to FacebookShare to Pinterest
Labels: Cuesta College, picture of the day

Picture of the Day - Nocturnal Negranti's