This morning I received a phone call from mom before I could even get caught up on all the news via the internet. She informed me that she had just watched The Weather Channel and they had announced that the effervescent and quirky television weather legend Dave Schwartz died yesterday from stomach cancer. I was not shocked as all his fans were aware of his cancer struggles following his announcement of same last year. I had hoped he would pull through not knowing his stomach cancer was a metastasis of pancreatic cancer which is pretty much a death sentence for anybody. I lost my friend Steve Shears to it a few years ago as some of you may recall. Schwartz was a friend of sorts through the years when he worked at TWC, including years when I was fairly socially isolated with my Kim issues. Schwartz, in his charmingly quirky way, kept me company telling me the weather for Akron, Ohio, the next day or a myriad of other meteorological things that kept my mind occupied. I hope he was ready for eternity and he and God had a conversation before he slipped this mortal coil as I would love to meet him personally someday on the other side.

Email ThisBlogThis!Share to TwitterShare to FacebookShare to Pinterest
Labels: in memoriam, television, weather

Picture of the Day - Wedding Treehouse

These are my favorite idioms (in no specific order) and I do use them all in my own speech. It is worth noting that a disproportionate percentage of these originate from south of the Mason-Dixon Line. Yes, my family (my mom's side) comes from the South.

Most Awesome Tanker Drop Ever

I first viewed this video yesterday on Facebook which is the only social networking site in which it has appeared as far as I know. The videographer known only as "808" captured this emergency drop on a Santa Clarita Valley area neighborhood in Sand Canyon under direct and eminent threat from the Sand Fire on either Saturday afternoon, July 23, or Sunday afternoon, July 24, 2016, Days Two or Three of the incident when it was burning homes and killing people. In my opinion this is the very best tanker drop footage yet captured anywhere at any time. Aside from capturing the urgency of the situation, it is very close to the action, shows the entire process of a drop including the lead plane directing the tanker along its path and where to start the drop, shows a DC-10 supertanker, and despite being taken with a smart phone, it is steadily held and well-framed videography. Enjoy!


California Disasters was born on May, 18, 2007 on Yahoo Groups as a figment of my inspired cogitations while driving through the western Mojave Desert near Mojave, California. My then-girlfriend Krissa Klein's familiarity with and overall tech-savvy made it happen over the phone and the rest is now history (thanks Krissa!).

I was late to the game of the internet and social networking and missed the old talk groups and got in on Yahoo Groups during what was perhaps the beginning of their decline or end of their peak in 2005. I have since stuck it out as the Yahoo brand has declined over the subsequent decade.

Now, with large parts of the Yahoo franchise just now this week sold to Verizon, I am forced to take stock of the current situation. We all know that Yahoo became Yahell at some point (probably when current CEO Marissa Mayers' team degenerated Yahoo Groups into the cluster fuck known as Neo Groups as the company's focus and priorities drifted elsewhere and the quality of the Yahoo Groups product declined.  I have stuck it out but have also felt restless and moved into other social networking platforms in order to improve the California Disasters experience and brand and move it past Yahoo Groups.

I invite each of you reading this blog post to join one or more of these California Disasters formulations immediately and stretch your horizons and be part of California Disasters' evolution into the future as at some point Yahoo Groups will be permanently shut down as has long been anticipated as happened to Myspace's Groups service.
Posted by Kim Noyes at 3:02 AM 1 comment:

Picture of the Day - Pissing In The Oval Office

Today during the 2 p.m. hour, driven by strong westerly winds, a roadside wildfire along the eastbound/northbound slow lane of the Antelope Valley Freeway (Highway 14) ran hard across an adjacent wash further south, into some low-laying hills even further south, and still further south up into the Angeles National Forest at the western end of the San Gabriel Mountains. Tonight, the Sand Fire has run over the spine of the mountains and as of this posting is threatening Little Tujunga Canyon and environs over on the San Fernando Valley side of the mountain range.

Given the population density in the general area of this incident and the fire being up on a mountain range that is easily viewed from just about anywhere, a wealth of photographs and video footage of this conflagration was captured, some of it even very good or even great. Below are the very best non-fire photographer images of this incident I found on Twitter. To me this is citizen journalism at its best. The images are presented in the order I was approved to use the images by their creators whom I thank with all sincerity. I will continue to add more images as permissions come in as some photographers undoubtedly went to be bed early and won't see my requests until the morning.
*NOTE: remember that these images belong to these photographers and they control their use and retain rights to them unless otherwise specified.

Of Irony, Ideology, Idiocy, and Idiosyncrasy

Email ThisBlogThis!Share to TwitterShare to FacebookShare to Pinterest
Labels: politics, rantings and ruminations

This joke started on Reddit and is now making its rounds throughout all corners of the internet:


"Donald Trump and Hillary Clinton are in a plane crash. Who survives? America."

Broken But Not Condemned

I discovered this song tonight quite by accident. It really struck a nerve in my heart and really speaks to where I am right now in my life. I've felt real broken the past month and a half or two as a consequence of many things happening to me at once, some of it inflicted upon me and some of it self-inflicted. I'm finished feeling broken. I am reminded in Romans 8:1 that there is no condemnation to them who are in Christ Jesus. As for the artistry of this amazing 2013 Depeche Mode track "Broken" from their album "Delta Machine", they seem to keep getting better and better as their 80s and 90s stuff was great, 2005's "Precious" which I shared HERE was awesome and now this.

Last night at my friends Ted & Janet's home, my church family (centered at North County Christian Fellowship) held a celebration of my recent graduation from Cal Poly with a most awesome gathering of human beings and a magical evening happened. It was just what I needed as I have been in sort of a funk over the past month. I feel rejuvenated and ready to move forward now. Thank you all, my lovely adopted family and friends, for the best evening I've had in a long time.

Picture of the Day - My Cal Poly Diploma

Email ThisBlogThis!Share to TwitterShare to FacebookShare to Pinterest
Labels: Cal Poly, picture of the day

Today I joined my history mentor Dennis Judd to a Cuesta College Board of Trustees meeting on the main campus in unincorporated San Luis Obispo (SLO) between SLO and Morro Bay in the shadow of both Cerro Romauldo and Hollister Peak. We attended this otherwise boring kabuki in order for Judd to "prepresent" along with other activists the interests of the future of the historic Hollister Adobe located on the campus adjacent to Camp San Luis from which the campus was carved. Before and after the meeting we visited the old structure and snapped a few images.

Recently I found these two informative and accurate graphs on Twitter. Both address a particular aspect of changes in wildfire in the west. These changes are largely due to climate change. My climate change skeptic friends will argue that mismanagement of forests by way of removing natural fire from the natural environment for the better part of the 20th century is the cause of more severe wildfires. While that is a factor, it only applies to forest ecosystems, but is not a factor so much in the chaparral and grasslands where fire patterns are also changing. Others will try to argue that the preponderance of interface zones, particularly in the Western U.S. are to blame for increasing property losses. That, too, is a factor, but also only partly accounts for the problem as property losses are but one measure of a fire's potency while not being a factor in fire frequency and fire ferocity, which are more to the point of these two graphs. 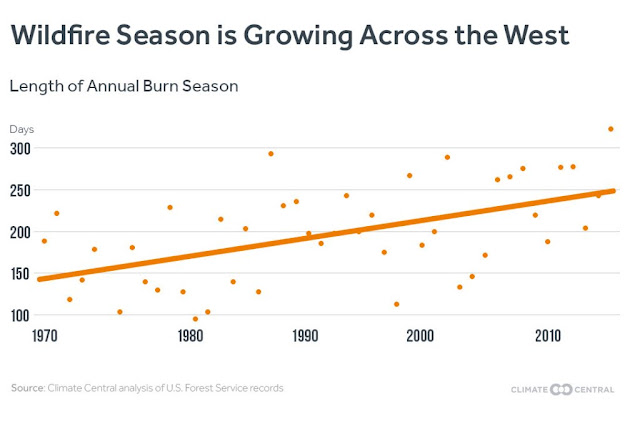 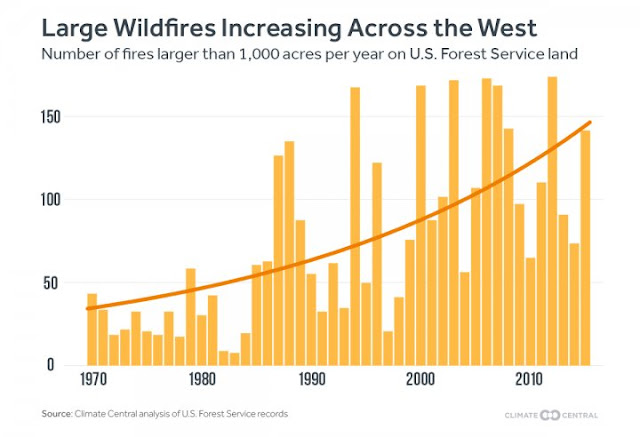