Our friends Ben & Eileen Halpin of Chico sent me some more photos of their recently discovered Nephrite boulders from a friend's ranch in the Stonyford, CA, area which we are sharing with you below. We invite you to check out Part One of this series. 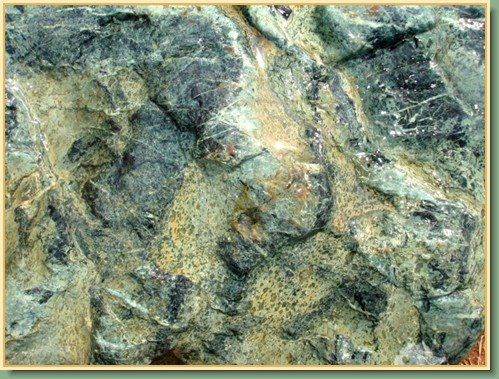 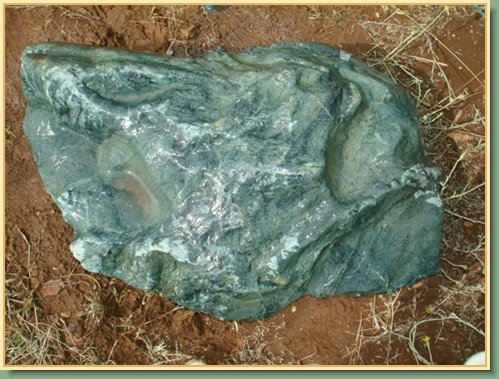 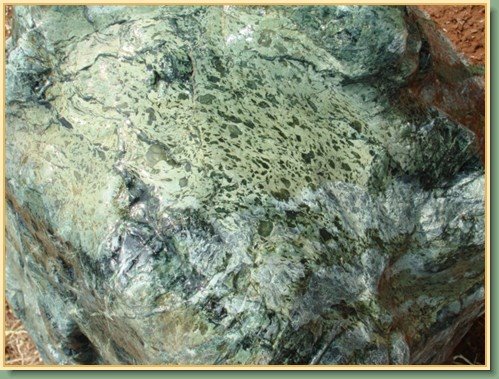 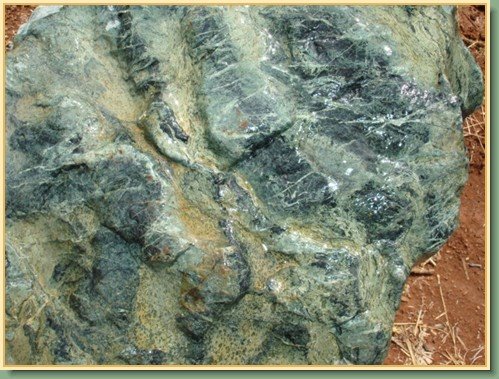 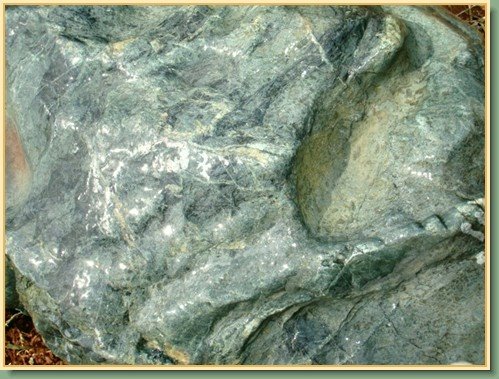 These photos were taken by Ben Halpin who retains the rights.
Please ask his permission if you wish to use them.
He can be easily reached at Halpin's Rocks.


We Are a No Show This Weekend

We pulled out of the Rockatomics Gem & Mineral Society's Rockhound Roundup this weekend right at the last minute. Krissa and I were starting to load up and her back was killing her as a result of the drive down here to Atascadero from Willits via the Sacramento area. I knew darned well this would only get worse throughout the day and weekend as a result of further driving down to the San Fernando Valley and then doing a show outdoors all weekend. Therefore, I pulled the plug on doing the show. We decided we would make money at home this weekend instead by getting our K&K Earthwerks Store revamped and up-to-date.

More On Missing The Show

One of the organizers of the show graciously called me last evening to check out if we were okay given that we had not showed up as planned. I had sent the club an email informing them of our situation but they had not read it yet. Their website features no phone contacts and I had sent in my contract so I had no way of knowing the phone numbers to call them. Anywho, I appreciate that gesture of care and concern in the event something bad had happened to us en route down to the show.

Next weekend, Saturday, June 13, and Sunday, June 14, 2009, the San Luis Obispo Gem & Mineral Club will host its 49th annual Cayucos Gem & Mineral Show at the Cayucos Vets Hall next to the Cayucos Pier on the Cayucos beach front. The show will run from 9 A.M. to 5 P.M. both days. Admission and parking are free and there will be free door prizes and all three local clubs will have displays for our visitors to view. There will also be a Santa Maria-style barbecue out in back in the California State Parks barbecue area. There will be 12 dealers at this year's show including Wonderworks/Mineral of the Month Club, Rocks & Relics, Rock Solid Jade, Gary's Jewelry & Lapidary Supplies, Steve's Showcases, Su's Creations, Jewels by Josie, Andy DeLong, and this year for the first time, Keith Olivas. Also, K&K Earthwerks will share a booth with Jade Cove (Mike Lyons). Featured prominently at this show will be gems, minerals, fossils, crystals, jade, jewelry, beads, and lapidary supplies. We invite everybody reading this to come visit our show and have a lot of fun and equally important, learn something new about the mineralogical world.

The San Luis Obispo Gem & Mineral Club is conducting a field trip to Gaviota Coast on Saturday, June 27, 2009. We will all assemble at the parking lot the Dinosaur Caves Park in Shell Beach at 8:30 A.M. that morning to carpool down there. We will probably hit all three state beaches (Gaviota/Refugio/El Capitan) as well as perhaps some of the unnamed coves between Gaviota and Refugio that are usually frequented by only surfers and nudists. Members of other clubs are welcome to join us as well as freelancers.

Many of you know respected dealer Keith Olivas of Lemoore, CA, who does many of the shows in Central California and in some cases beyond. A couple of weeks ago the home of he and his wife experienced a catastrophic natural gas leak which resulted in a fiery explosion which destroyed their home, including his entire personal collection and most of his business inventory. All that survived was what was serendipitously being stored in his van at the time. A room in the Cayucos Vets Hall that I didn't even know existed will be rented by the club for an additional $150 so that Keith can come to Cayucos with his wife and the two of them get their minds off their problems for a weekend and make some badly needed money. We encourage everybody to come to the show and purchase something from the Olivas in support of one of our esteemed dealers and an all around good guy (and gal).

Many/most of you have noticed the unseasonably wintry weather we have experienced here in California in recent days. This is the result of an unusually intense and long-lived cut-off low that has been wobbling over our state for the better part of the past week. This low pressure system brought thunderstorms to the state early this past week which caused wildfires that are still burning as well as struck several people with lightning killing at least two of them. This weather regime end fairly soon at which point the weather here in California will start feeling seasonable again. Due to the unpredictable nature of cut-off lows, there is a saying about them which goes "cut-off low ... weatherman's woe".

California Disasters Group on Yahoo has reached 1,400 members this week. This is actually the second time it did that before hovering just below that mark for the past few weeks but I suspect we're into the 1400's for good now and we invite our readers here to join us there for more complete and detailed discussion and reportage of disasters and other interesting natural events in California, past, present, and future.

On this date three years ago, the two of us met for the first time along the South Fork Eel River at Dos Rios in Mendocino County, California. The date then was June 6, 2006, or 6/6/06. ;-p
We had immediate friendship chemistry which gradually grew into more than mere friendship.
Krissa was interested in me first going back into late 2006, but we did not officially become we until the week of Valentine's Day 2007. I first started noticing Krissa as a young woman and not merely a friend while she was down to visit me over the course of her Winter Break 2006-07. At first I was uncomfortable with our age difference while she never was but in time I accepted it and became "okay" with it. I'm glad we established the friendship first as that is the most solid foundation upon which to build a relationship aside from inviting God into any relationship which we have also done. Tonight we plan to go out and have dinner and see a movie to celebrate.
Posted by Kim Noyes at 11:59 AM No comments:

My friend Ben and Eileen Halpin of Chico recently rockhounded at a friend's ranch in the Stonyford, CA, area and found some suspected Nephrite Jade boulders as well as a nice big boulder of Robyn's Poppy Jasper which can be purchased at their website Halpinsrocks.com. I invite you to check out Part Two of this series which contains more detailed images. 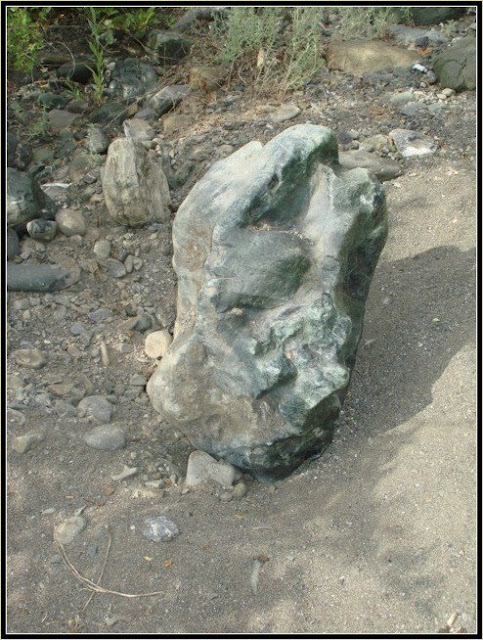 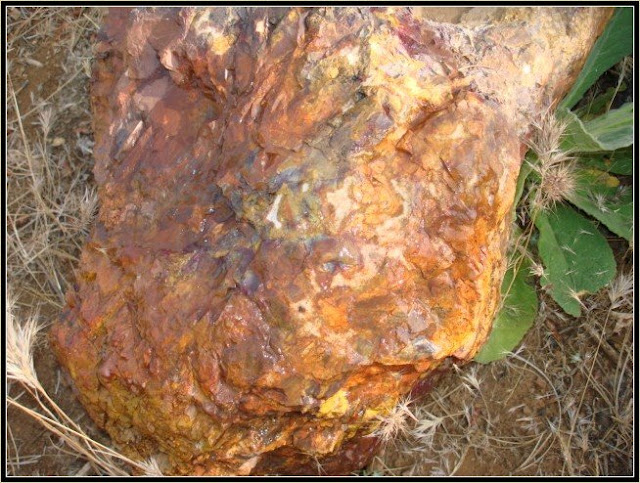 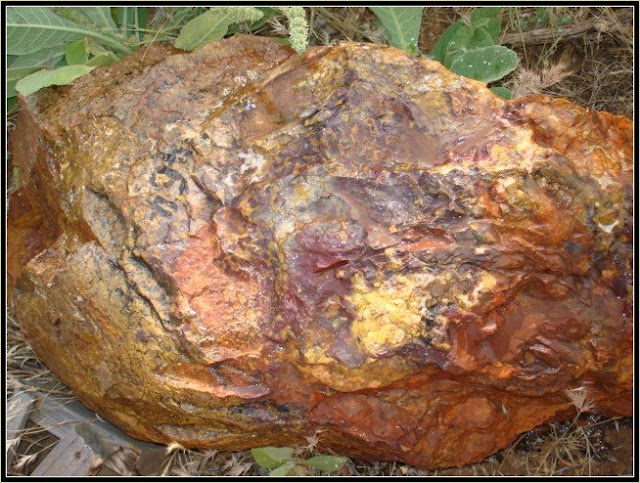 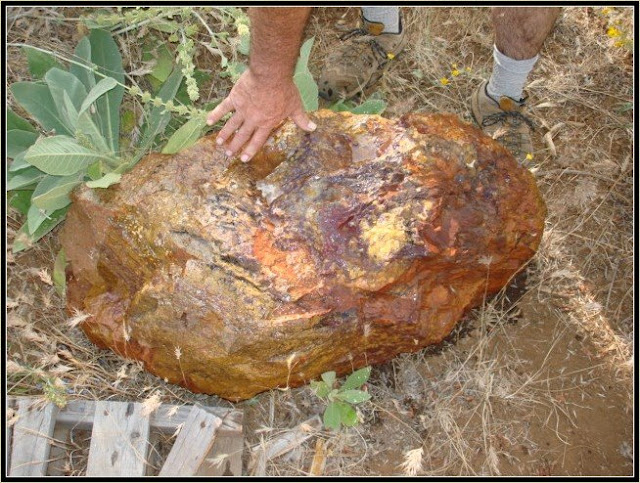 Ben reminds me that he has more of these materials available as well as more nice Brecciated Jasper.

By the way, the individual in the photos above is not Ben but the owner of the property upon which the material was found.


These photos were taken by Ben Halpin who retains the rights. Please ask his permission if you wish to use them. He can be easily reached at Halpin's Rocks.
Posted by Kim Noyes at 3:36 PM 1 comment: