This afternoon the Prescott Fire Department's Granite Mountain Hotshot Crew (a Type-1 hand crew) was defending the Arizona town of Yarnell when the Yarnell Hill Fire blew up on them forcing them to deploy their shelters but to no avail as they were nearly entirely wiped out with 18 or 19 of the crew killed. This story is in its early stages so there is much more unknown than known including precisely how many were killed and if there was one survivor as some reports indicate as well as what precisely went terribly wrong today. Initial reports have half of Yarnell leveled by the fire with approximately 250 structures destroyed. Details here will undoubtedly be revised as more becomes known.
At bottom is a television news segment about the crew and their training taken earlier this year.
HERE is a newspaper article about them just one week ago as they worked the Doce Incident near Payson, AZ.

Picture of the Day - Scatological Discord

Email ThisBlogThis!Share to TwitterShare to FacebookShare to Pinterest
Labels: humorous, picture of the day

I'm "Possessed" By This

My dear, sweet friend Erin shared this with me just now and it was love at first hearing of the music and love at first sight in seeing its cute and clever accompanying video. I'll probably watch/listen to this over and over in the coming days as I'm wont to do when I find a new musical infatuation. The artist is a European duo whom call themselves The Green Children. I love the message/theme of this song and hope to be the recipient someday of such love on all levels. I'm certainly ready to give such to another when the right person comes into my life by God's will.

Email ThisBlogThis!Share to TwitterShare to FacebookShare to Pinterest
Labels: music

I found this via Twitter several minutes ago and it resonated with me so I'm sharing it with you. The West Fork Complex consists of three fires which in the aggregate have burned over 80,000 acres as of this morning.

Tsunami As Harvester of Souls

This hilarious (NSFW) spoof of the Batman-Joker Interrogation Scene in the film The Dark Knight is something I actually saw BEFORE I ever watched any of the actual film strangely enough. I have heretofore neglected to share this on my blog but now seems perfect given the previous post here features the original scene in the film to which this spoof refers. Enjoy, but be aware it is not for all tastes.

How Heath Ledger Earned An Oscar

Unfortunately, I did not discover how much I like Heath Ledger as an actor until after his death. I appear to be going through a Batman movie phase at present (applies only to Christopher Nolan versions only and mostly the last two movies at that). Ledger was quite deservedly awarded a posthumous Best Supporting Actor Academy Award for his role as The Joker in The Dark Knight. Below are my favorite scenes featuring him and they are arguably his best scenes in that film and perfectly demonstrate his acting genius. I have presented them to you in the order they appear in the movie. For those of you whom have not seen this movie I highly recommend you do so at once.

Email ThisBlogThis!Share to TwitterShare to FacebookShare to Pinterest
Labels: movies

Quote of the Day - "Selena Kyle"

I'm not going to say what has inspired me to think of this memorable quote Selena Kyle a.k.a. "Catwoman" played by Anne Hathaway in Christopher Nolan's The Dark Knight Rises but given the recent events covered in this blog I'm sure you can easily connect the dots for yourselves.


"There's a storm coming, Mr. Wayne. You and your friends had better batten down the hatches. Because when it hits you're all going to wonder how you ever thought you could live so large and leave so little for the rest of us."

Email ThisBlogThis!Share to TwitterShare to FacebookShare to Pinterest
Labels: end of the age, movies, quote of the day, rantings and ruminations

Today I spent several hours helping with parking at the 2nd Annual Real Men Drink Pink breast cancer research fundraiser and rosé wine-pouring event held at Star Farms in east rural San Miguel, CA. I saw a lot of local wine-making celebrity as well as a great deal of wealth. Most if not all the people with whom I interacted  were very gracious and respectful. This impressed me and once again gives the lie to the myth promulgated by the class-warfare-making class whom vilifies the wealthy that they are a bunch of unpleasant people which simply isn't the case. There are jerks to be found on ALL socio-economic levels but I met none today amongst these bourgeois. Of note this day was the performance of The English Beat whom sounded very good, the amazing playlist of the event DJ featuring gem after gem of 80's musical glory (New Wave being emphasized) as well as the one medical aid call for a woman down from heat + excess alcohol consumption with San Miguel Fire responding two units for a total of 5 personnel and San Luis Ambulance sending Medic 21 with two paramedics aboard for whom I played bird dog into the scene.

Today I worked my first concert at Vina Robles Amphitheater as an usher down in the inner section immediately in front of the stage. I arrived at 4 p.m. and left around 11 p.m. with a half-hour break late in the concert. We arrived and at that time found out precisely where we'd be stationed in the event and what we'd be doing as well as were issued our shirts identifying our role as members of Guest Services. This is much like Star Trek where different shirt colors denote different roles on the ship. Quite fortunately, light blue shirts here are not the equivalent of red shirts on Star Trek! The one hazard we did face was the heat (at least early on) with one member of my team getting faint from heat exhaustion at one point and needing a break.

This event was our "soft" opening as it was a free concert to introduce the venue to our community and generate interest and publicity while we as a staff and indeed the entire operation used it to practice for our "hard" opening on July 6th. The first act of four (all of which I loved) was Jill Knight and the 805's (hippest act) followed by One Time Spaceman (my favorite) followed by Girls + Boys (lead singer Brianna Lee is HOT) and climaxed with the Zongo All-Stars (the highest quality act) by which point a lot of folks had congregated up in front of the stage to dance, something we did not allow earlier in this free concert and won't be allowing the rest of the concert season.

All in all the concert seemed like a success although there were a few minor logistical details we need to improve upon before our hard opening with the band Yes on July 6th. I certainly had a ball and enjoyed myself much too much for someone being paid to be there.  The property itself is brilliantly layed out and looks fabulous. Something I heard oft repeated today was "there is not a bad seat in the house" and I wholeheartedly agree. To my artistic eye the lighting in particular is visually sumptuous which I feebly tried to capture in the images below.

Note: the images below were shot on my break or after I was off the clock for the night except the first image. I am borrowing a friend's camera to which I am unfamiliar so the quality of most of the images below is lacking in my judgement so please pardon me while I get better with this machine.

Quote of the Day - "The Joker"

I have been going through a Batman movie phase lately (only the Christopher Nolan ones and especially the last two) and having dealt with mental health issues of mine own in decades past as I've openly discussed on this blog I find there is a great deal of truth to the following line by The Joker (played brilliantly by the late Heath Ledger) in the movie as there were in a good many of his lines in the movie. These were the very last lines spoken  by The Joker in this film and they were directed at Batman (played by Christian Bale).


"You see, madness, as you know, is like gravity. All it takes is a little push!"

Email ThisBlogThis!Share to TwitterShare to FacebookShare to Pinterest
Labels: movies, quote of the day, rantings and ruminations

Picture of the Day - Raging Rectangles

Jewels Of The Earth By Diana

Since first I ever set eyes upon the jewelry design and making artwork of Diana March I have been enamored with her expert eye for selecting truly great pieces of mineral, fossil, tektite, or meteorite as pendants as well as her extraordinary sense of design and highly-skilled execution in wirewrapping those pieces into amazing works of jewelry art. As if that weren't enough her prices are incredibly affordable given what they are. On top of that she is an incredibly affable, down-to-earth, and kind-hearted person who has avoided getting all self-importantly full of herself as too often happens to artists moving up in the world.

And I won't neglect to mention her awesome husband who possesses an awesome talent for designing wonderfully creative displays for his wife's jewelry. He's also a real hoot to banter with. In these two people the whole is truly greater than the sum of its parts and it is a pleasure to know them to the degree that I do.

As some of you may or may not know I am not a jewelry-wearing guy but after acquiring an Ernie Porter-collected piece of jade I recruited Diana to create a pendant and necklace for it befitting a man's man and as those of you whom have been following this blog may or may not recall she created THIS amazing work of jewelry art I wear to all special occasions.

Below are images of their display at last weekend's 53rd Annual Cayucos Gem & Mineral Show. 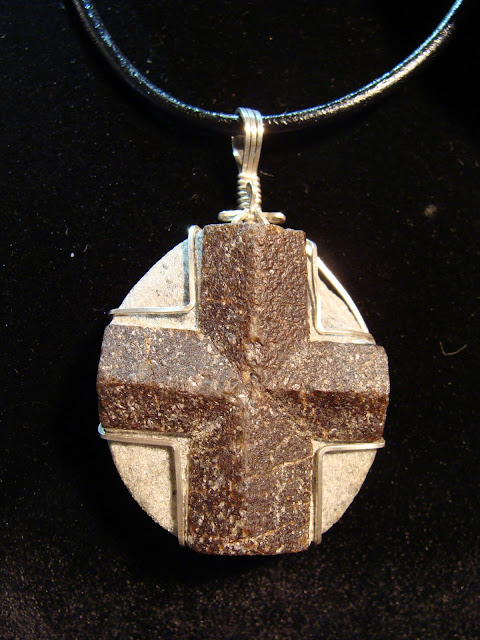 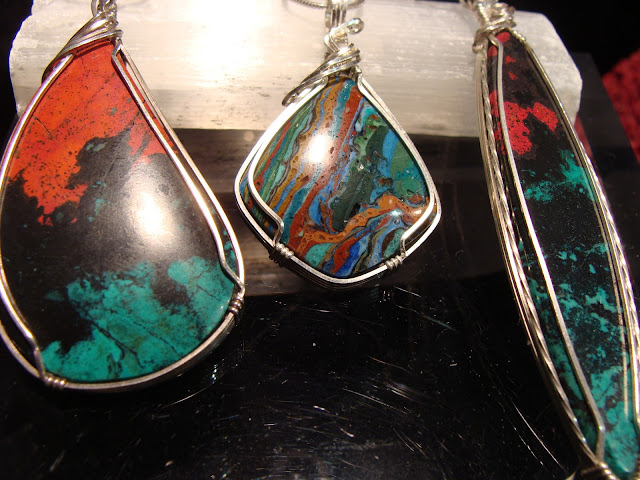 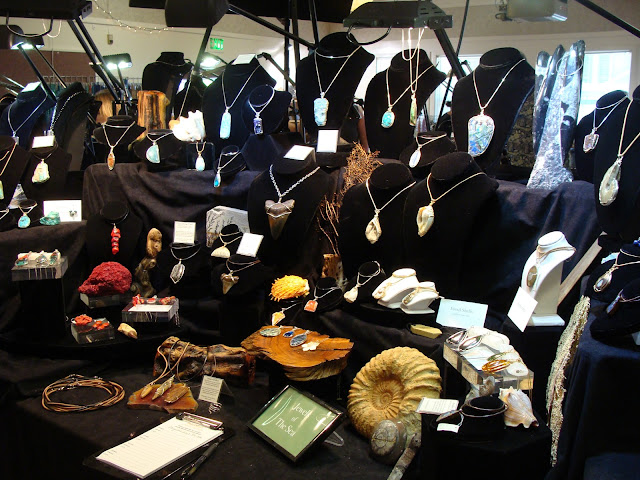 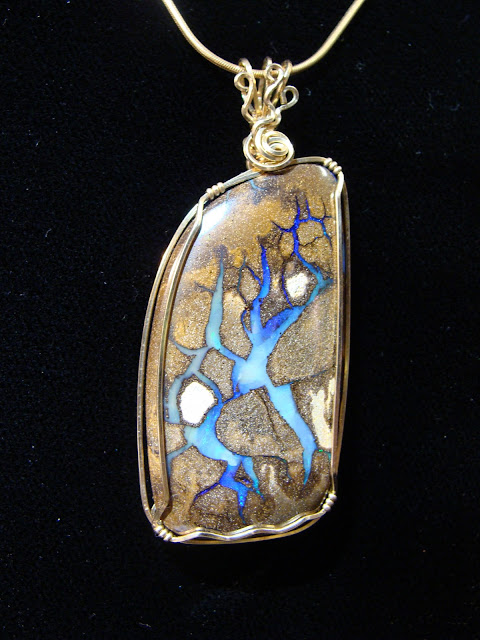 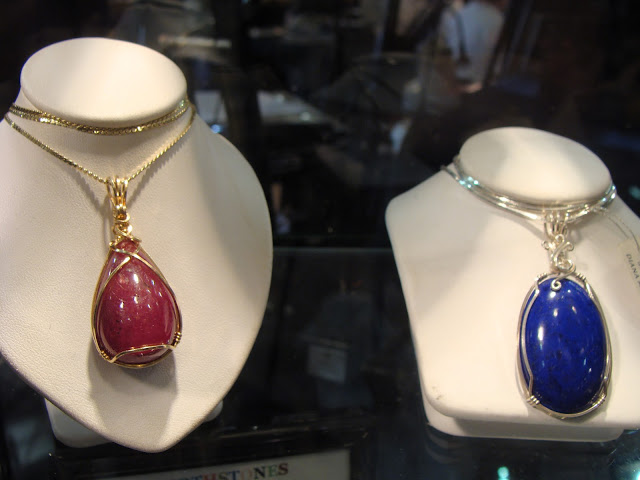 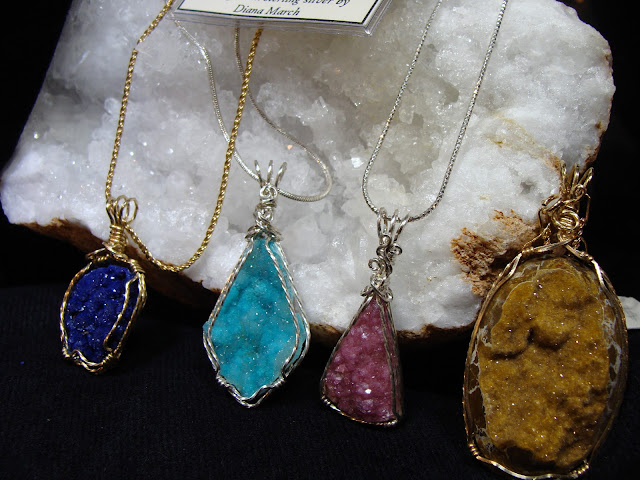 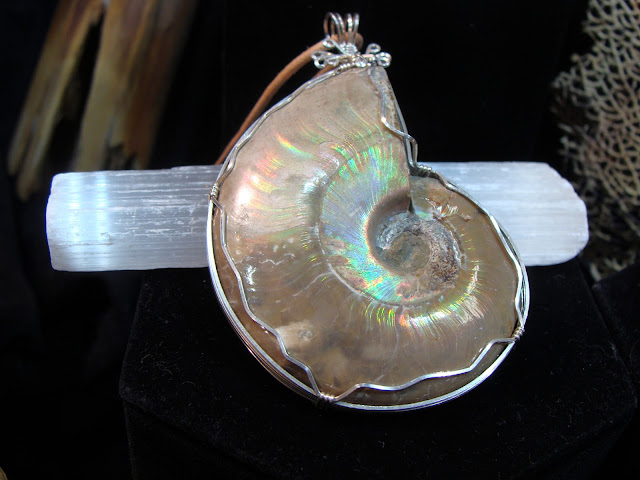 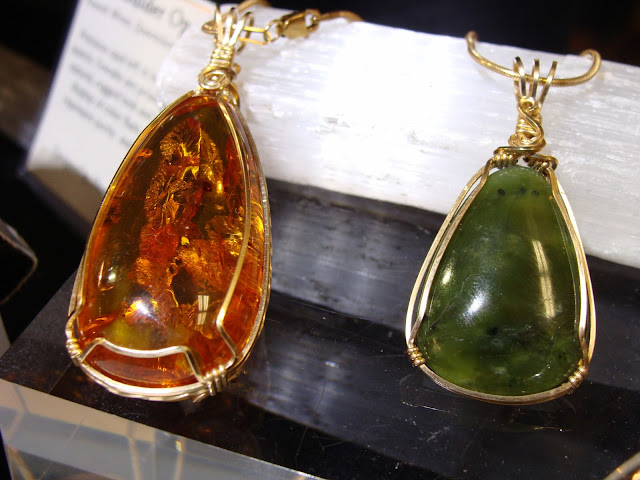 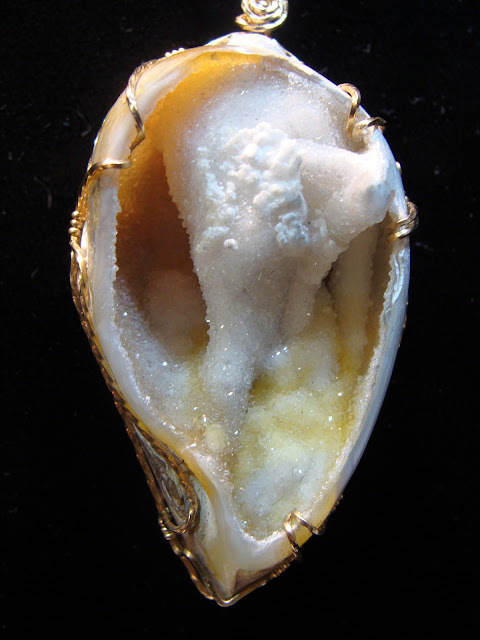 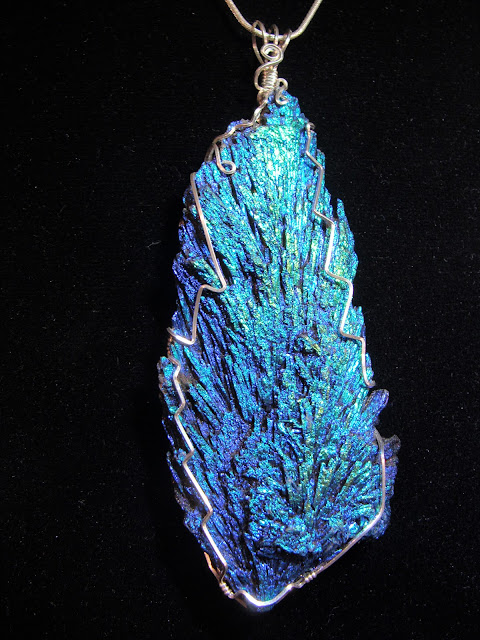 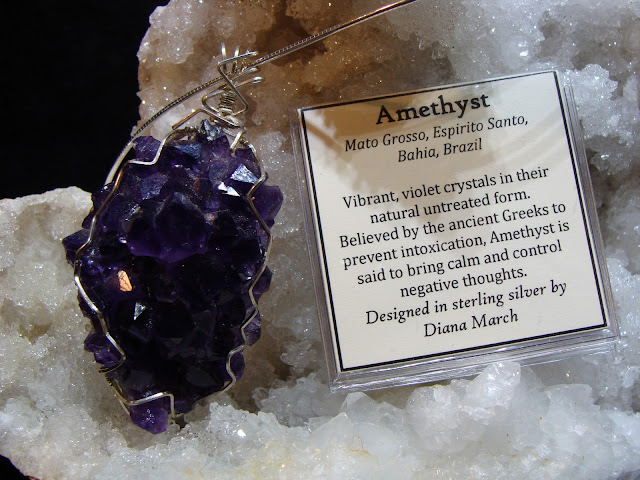 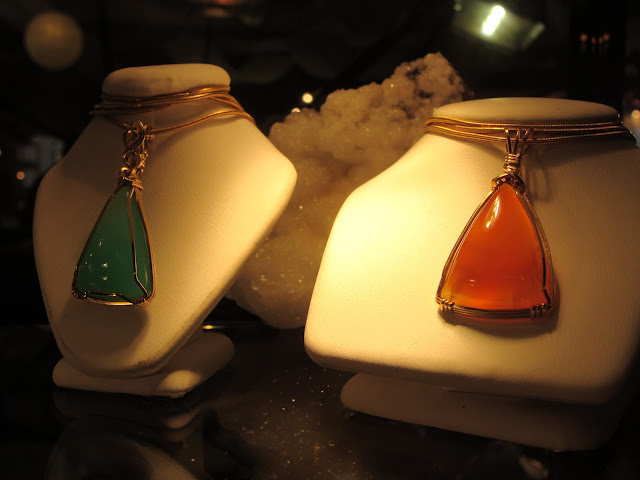 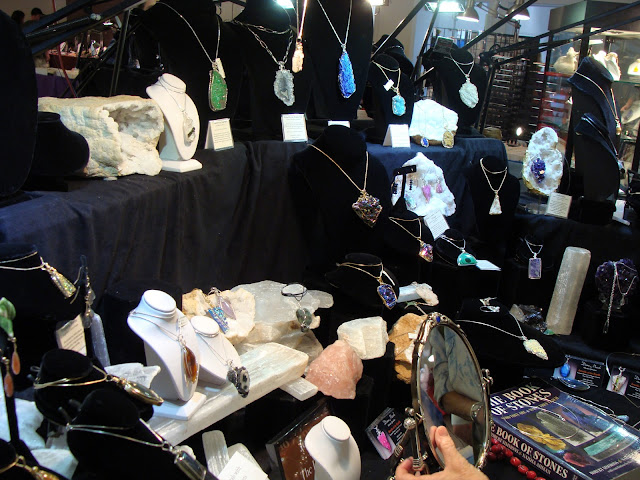 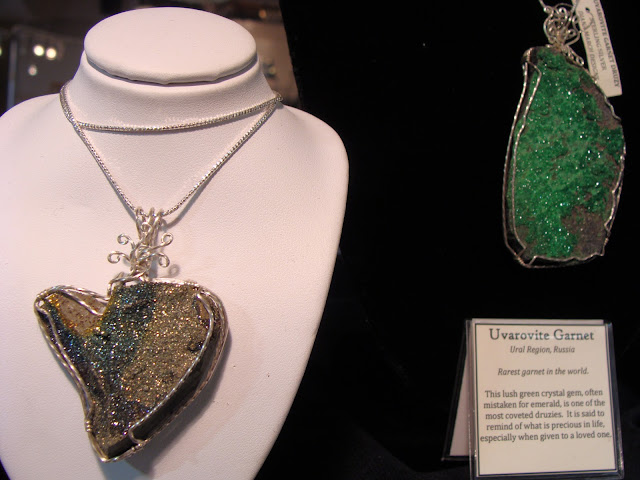 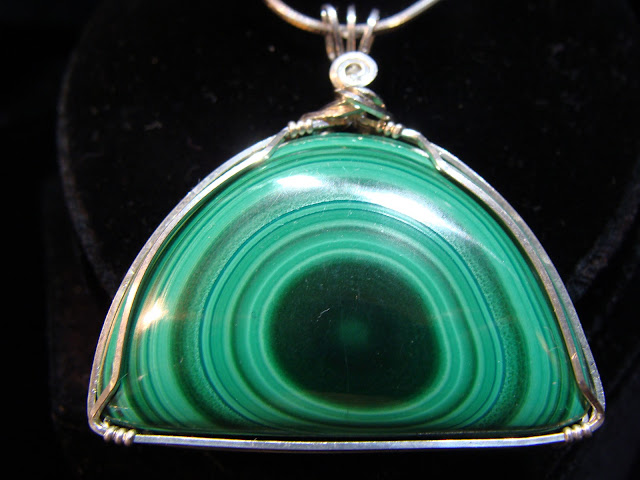 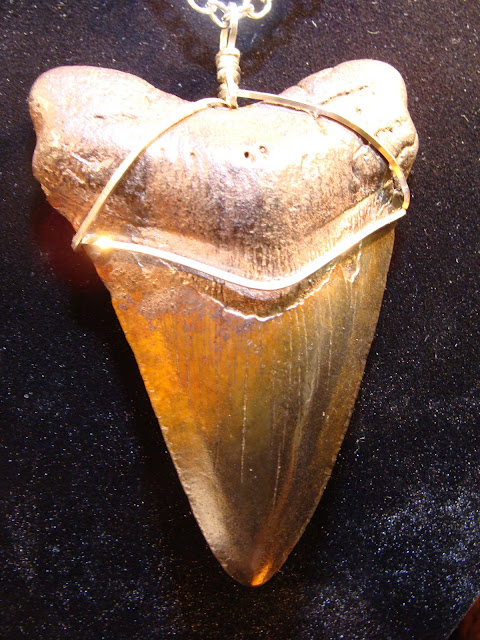 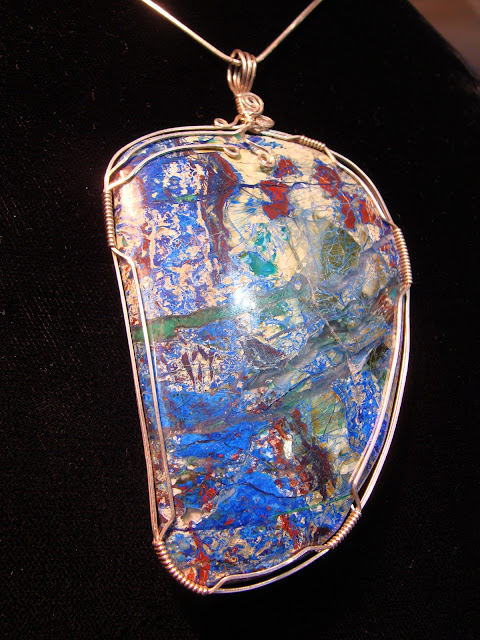 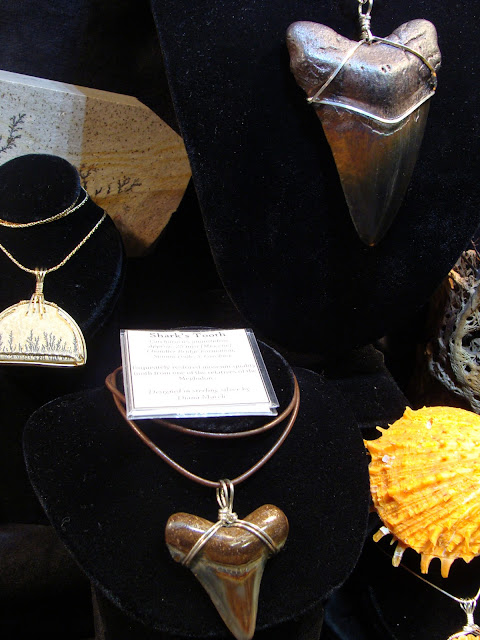 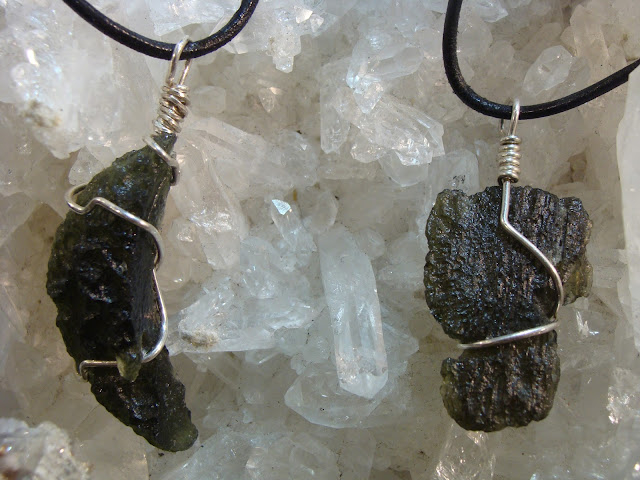 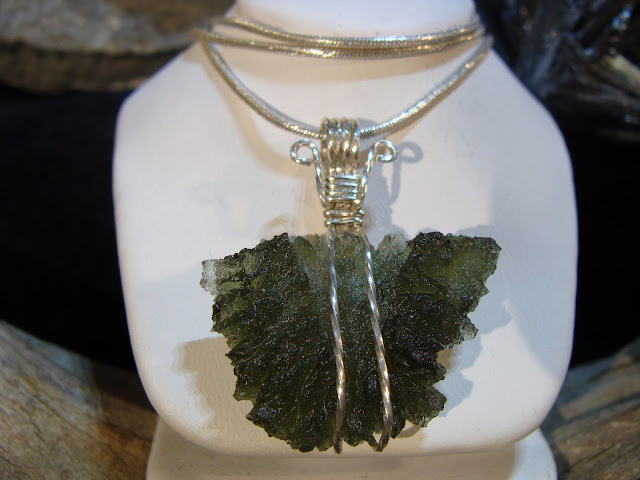 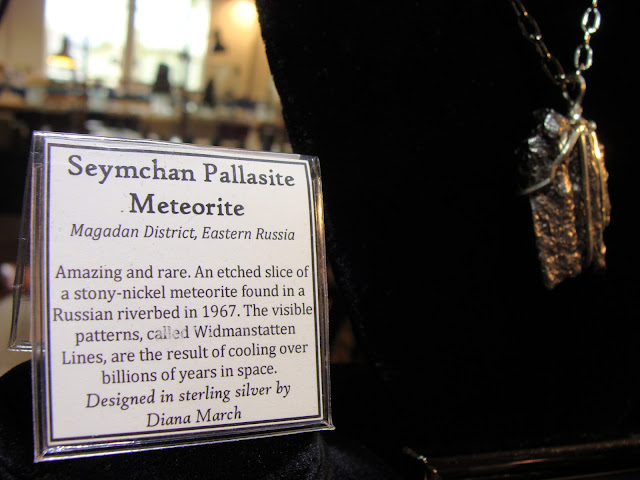 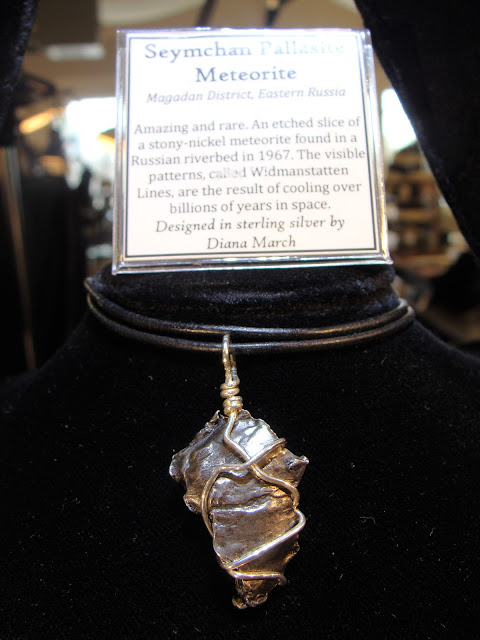 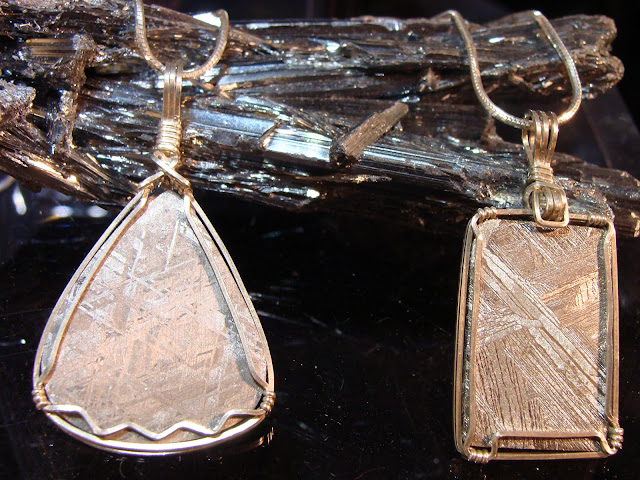 This past weekend I had the honor and privilege of participating in the 53rd Annual Cayucos Gem & Mineral Show. While there are Sunday morning while the day was typically slow in starting at Sunday's are oft wont to do I had the time and opportunity to take some images for a thirteenth installment of my Rock Photography series. I prefer natural light in my photographs so I use artificial light sparingly which in some images might frustrate some but that is how I roll.

For a peak at last weekend's show please check out Day Three and from their link through to the other days of the show.