A Little Update On Where I Am Today

Since late last November or early last December I have had an appointment for mom for this Tuesday, February 2nd, set up with her first doctor since the late 1980s (when she had Delmar Greenleaf) that I got her through her Medicare Advantage Plan that I got her. One of the important and timely reasons for this appointment is so she can get the process started for getting ADA-certified for a handicap placard. This would force the city to allow us to keep her ramp to her front deck contrary to municipal building code's mandates. She knows she needs the placard just for her own convenience given how crippled she is becoming AND it would give her the convenience of the ramp AND it would make the house saleable at full market value which would benefit her AND it would mean I would not have to find her a roommate with an ADA placard whom she might not like living in her home. I made all of this abundantly clear to her yesterday because I know her well enough to know she might take off because she compulsively and impulsively avoids doing things she needs to do and seems to know when she can disrupt my life most and then do it to get attention.

When I reminded her of this she informed me she planned on day-tripping down to Altadena for the day (Sunday) to visit her parent's grave on the 24th anniversary of her mother's death. This raised alarm bells because of the proximity in time to her appointment and her aforementioned proclivity. She also had recently told me how tired she was that she claimed she had no energy to be taking trips right now. I countered that I would like to go with her because I have not visited those graves since the last time I was with her doing the same thing about 15 years ago. She counter-countered that someone from A.A. (her go-to lying mechanism about having "people" with whom she needs to do stuff) was going with her and there was no room for me as mom has her car always packed (backseat is filled) for the Apocalypse and lives out of her car even when she is at home. I doubted the truth of her story but hoped she would keep to the day-trip aspect.

I went down to her house tonight and she has not returned which means she took off as I feared. Her modus operandi would be to overnight at the Best Western King's Inn in Kingman, AZ. She probably never even went to her parent's gravesite which was a cover story for her latest insane adventure in avoidance and disruption. She still might return home tomorrow in time for the appointment but things are not looking good right now. I choose to not stress on what I cannot control. I can control my choices and I choose to focus on trusting God to keep mom from going on a bender and hurting/killing someone in a DUI accident. I also will go into Dr. Kiger's tomorrow and see if he can get mom set up with the paperwork for ADA placard via walk-in visit because if mom misses her appointment it's another two month wait and the deck ramp thing won't wait that long. Perhaps driving mom to Kiger later this week can accomplish this task for our family.

I woke up this past morning after sleeping 8 hours feeling like something bad is about to happen. I decided attending my church is not what I needed this Sunday. Instead, I elected to focus on the specific things I know I need right now for what may come soon. I have no control over other people's decisions let alone the consequences of same and I have no control over the consequences of my own choices. My own power is the power of my own agency given to me by my loving Creator who is also using the things I experience to teach me and to modify me. I chose to sit down and get still and quiet and spend some time in quiet prayer with God and got into the word reading various parts of the Book of Hebrews. I selected some songs performed by Mahalia Jackson and Tennessee Ernie Ford to listen to for this day's worship music. I then listened to a full sermon by my late maternal grandfather. After that I prepared a 4-egg omelet with veggies and Parmesan cheese and salsa verde dumped over it and ate 8 slices of bacon. After that I elected to take a 10-mile walk. Then I made a conscious decision to be around healthy people and watched all four currently-dropped episodes of WandaVision to get caught up on that TV series.
Today I lived mindfully, employing mechanisms and strategies that are healthy and helpful and move my process along despite the chaos and disruption I am headed back into with my mom. I also once again gave mom to God and asked Him to take this burden from me as I feel it is close to becoming harmful to my well-being. God is in control; I am not. Let come what may! Everything is going to be okay in the end. It is not the end because it is not okay right now.
Posted by Kim Noyes at 1:00 AM No comments: 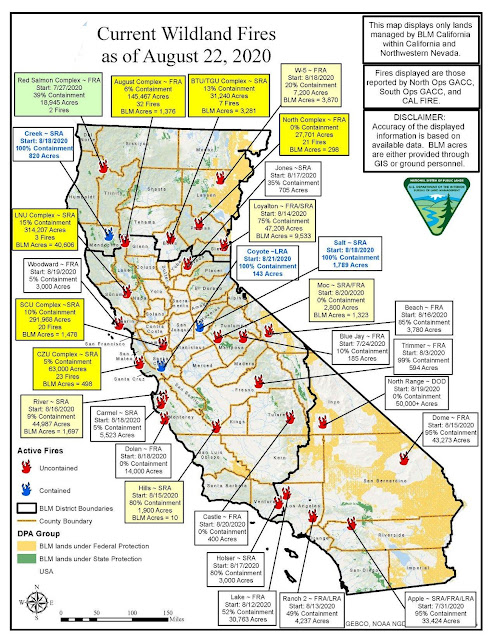 After starting out slow, this year's fire season is quickly turning into one for the record books (again). Unfortunately, it's about to get worse as another dry lightning convective event coming up from the south as remnants of a tropical system filter through trigger more lighting and in turn more fires to go along with potential flash floods, including in recent or even current burn areas. Hold onto your balls/ovaries lads & ladies!


Today while visiting my mother I found that she was already watching this disaster classic and not only that, but the infamous "earthquake scene" was mere minutes away so I waited for it and watched it and then got hooked and finished the movie and in turn neglected to get everything done at mom's place that I had driven nearly 30 miles round trip to do. I still find this more accurate than any other movie interpretation of this city being destroyed by earthquake. Sorry "San Andreas", et al. "Earthquake" IMDB "Earthquake" Wiki
Posted by Kim Noyes at 11:30 PM No comments:

Graphic of the Day - Oz Burneth 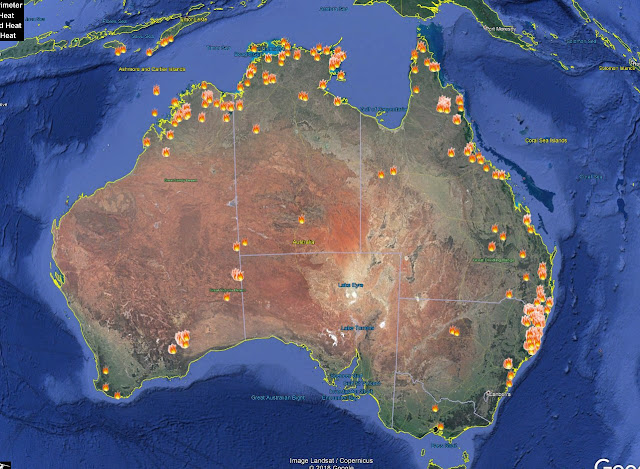 My friend Dave Touissant grabbed this graphic from MODIS imagery and tweeted it and here it is now on my blog. The extent and magnitude of the fires in Australia just keeps expanding by the day as this is no longer merely limited to New South Wales and Queensland. Imagery courtesy of MODIS.
Posted by Kim Noyes at 11:00 PM No comments:

Thank you for following this blog over the years or thanks for visiting for the first time. This is not a goodbye but rather HELLO AGAIN! I'm a creature of habit. I used to do this out of habit, then I stopped doing it out of habit. Tonight, I'm resuming the healthy old habit of posting here nearly daily. I also have over a 1-1/2 year's worth of back posts to drop here which will be coming in on a regular basis. The best way to see them is scroll back through my posts in sequence. I'll update this blog post and keep it at the top of this blog with notices of what back-posts have been dropped here and what dates they can be found at and links to them via their hyperlinked titles. Please keep coming back and I guarantee you won't be disappointed!


On August 14, 2019, I had lunch in San Luis Obispo with my 7th grade history teacher Mike Burrell. He was my favorite teacher at Atascadero Junior High School (now Atascadero Middle School) when I was there 1983-1985. En route there from my home in Paso Robles it felt odd to me driving southbound on Highway 101 through the former Highway 41 Fire burn area. It was 25 years to the day after it started and that area would burn the next day. My drive included the area adjacent to Santa Margarita Ranch where the fire jumped the highway as a massive 100 foot wide fire tornado. It also included the entrance to Tassajara Canyon which experienced area ignition conditions when the fire roared through. And lastly, it included Cuesta Grade which was charred entirely, top to bottom, north and south sides of Cuesta Summit. 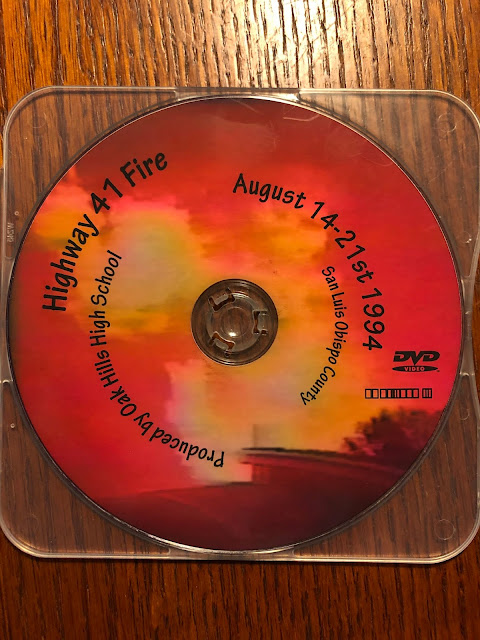 During lunch I brought this up with Mike and he informed me that in 1995, the year following the Highway 41 Fire, at which point he was then working at Oak Hills High School in Atascadero, he had his students put together a student documentary about the fire. After creating it they burned it on to blank VHS cassettes and sold them for $10 each for a fundraising drive.  After lunch I visited his home in SLO for the first time as we were reconnecting after all these years. Heretofore we merely briefly chatted on Facebook from time to time. Mike gave me the grand tour of his library/museum/arboretum/home which was a lot of fun. Before I left he handed me the only extant version of the documentary on disk. I asked him if I could burn some copies and donate them as well as upload the documentary to Youtube to which Mike generously accented. 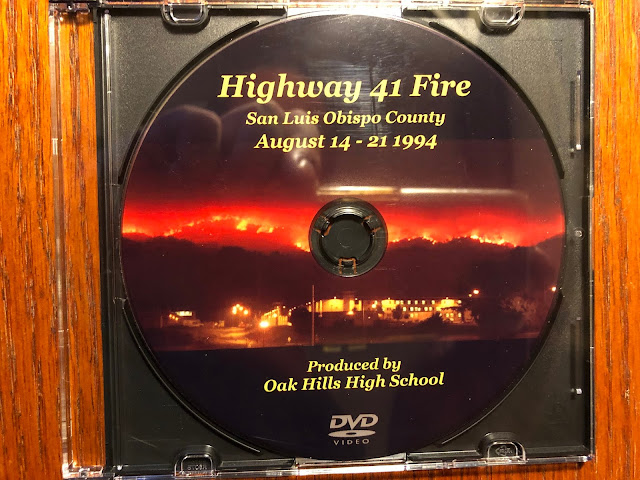 Back in Paso Robles I took this disk to The Blueprinter and they directed me to Gallagher Video Services in town. I made an appointment and met with Ron Gallagher and told him my expectations. I wanted several copies of this documentary burned and I wanted nice graphic design for them that was apropos in labeling the product and I wanted an mp4 copy of it burned onto a flash drive so I could upload it to Youtube. I did this last week and today it was ready and here you go. At top is the documentary on Youtube. In the middle is the old disk and directly above is a copy of the new disk version produced by Ron Gallagher. Nicely done I think. 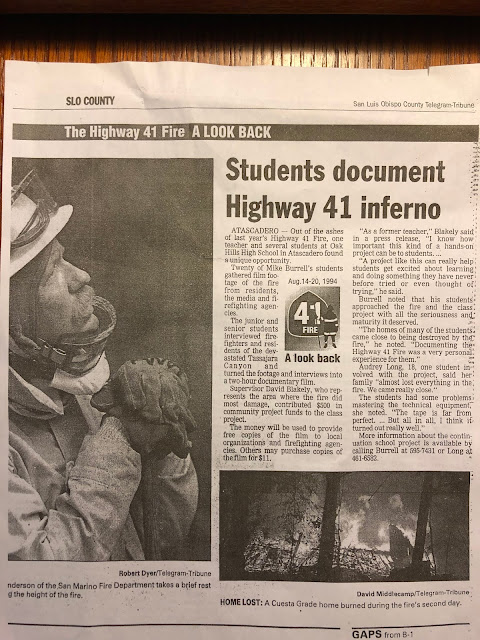 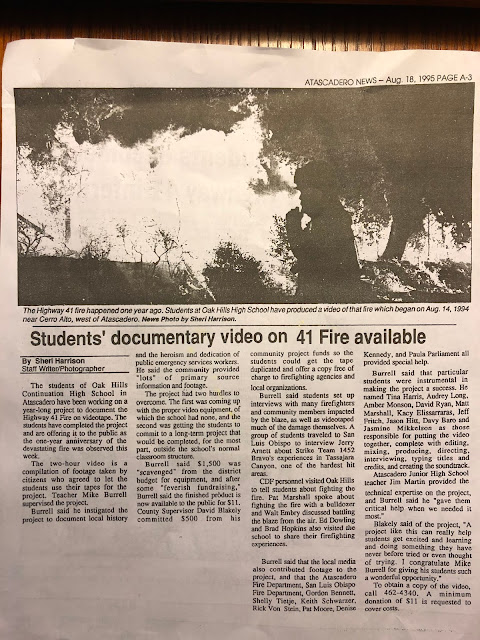 Mike also handed me a photocopy of an old SLO Tribune article from 1995 which recounts the story of this documentary. Read it above and if need be zoom in closer so the print is legible.
Posted by Kim Noyes at 11:48 PM No comments:


It's hard to believe that the infamous 2009 Station Fire which ravage the San Gabriel Mountains in Los Angeles County above the San Gabriel and San Fernando Valleys began 10 years ago today. Where has the time gone? This conflagration remains the largest fire in the history of Los Angeles County. Above is a preview to the Alan Simmons video production for this fire which I have yet to add to my collection. Perhaps someday that will happen. This is a great sampling in the meantime. Enjoy!
Posted by Kim Noyes at 8:50 PM No comments: