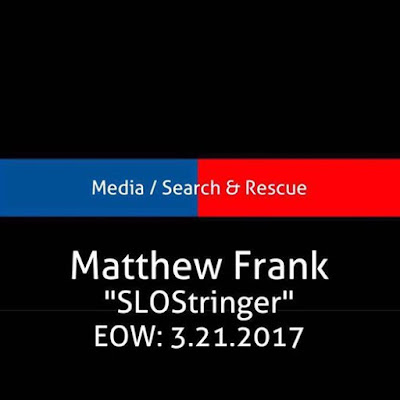 I never met Matthew Frank a.k.a. SLOStringer, but I certainly became aware of him over the course of recent years. His accomplishments as a top-of-the-line scanner buff, firechaser, and photographer/videographer have become locally legendary and even earned him respect in the fire photographer and stringer community across the state. His news service became something members of the Central Coast community have come to depend upon for immediate, accurate, and relevant news coverage even more so than our traditional news sources such as newspapers and TV. Stringers shoot video for money, while SLOStringer, despite identifying as a stringer, really was not one in the traditional sense as he already had another business (owned a motorcycle shop). He did his stringing for the pure pleasure of chasing the story and reporting the facts and supporting our local first responders. His service to various elements of our community and to the local community generally, ended early this morning in a predawn traffic accident in a driving rainstorm. We here in San Luis Obispo County will be less well-informed and less well-served moving forward without him in our midst. I suppose the only positive to come out of this is that he died doing what he loved as he was responding in the 3 a.m. hour from his house in San Luis Obispo, CA, to a reported house fire in Atascadero, CA. R.I.P. SLOStringer!
*Note: last summer he covered the Chimney Fire quite remarkably and I covered his coverage starting HERE.
**Note: The Tribune ran a beautiful story about him HERE.
Posted by Kim Noyes at 6:05 PM

Email ThisBlogThis!Share to TwitterShare to FacebookShare to Pinterest
Labels: firechasing, in memoriam