Picture of the Day - Menacing The City 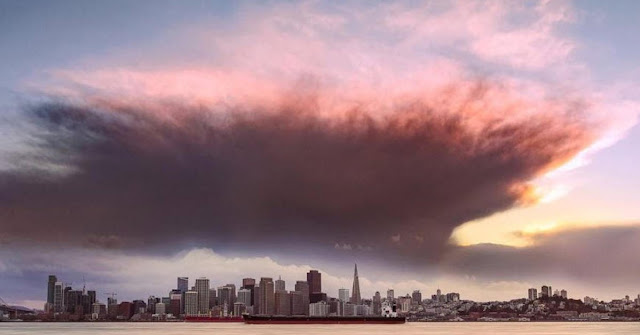 A short time ago I found this image accompanying a weather-related Tweet from the Bay Area NBC affiliate KNTV-TV San Jose. I clicked on the associated link and was taken to a photo gallery of weather images captured by the station's viewers featuring various aspects of today's California-wide winter storm. However, this image did not appear in the gallery and thus I cannot attribute it to the photographer. Upon first seeing this photograph, I was immediately struck by how ominous and even apocalyptic the scene captured appears. In this image is captured a distant storm cell (with cirrus outflow) looming over The City as it appears to bear down on it from off shore to the west. Not only does this scene bring to mind the concept of The City getting nuked by an atomic weapon or vaporized by a bolide strike, but alternately, a giant kaiju arising from the depths of the Pacific Ocean to attack The City or an alien mother ship obscured by clouds bearing down on The City by The Bay.
Photo source: KNTV-TV.
Posted by Kim Noyes at 5:25 PM