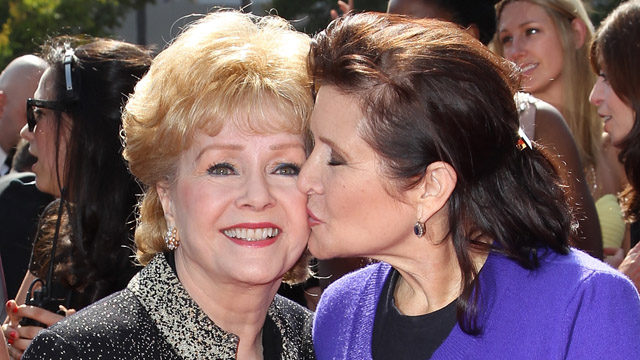 This is how I choose to remember them. Today, Debbie Reynolds died of a broken heart (via stroke) following the death (via heart attack) of her beloved daughter Carrie Fisher yesterday. Both women were beloved entertainers whose at-times stormy mother-daughter relationship matured over the years into a dear bond between them whose breaking broke both of them. I choose to remember them as they appear in the above photograph. This celebrity death drama, which started last week with Fisher's heart attack aboard a flight from London to Los Angeles, has emotionally affected me much more than most such stories due. I did not know these people and yet I grew up with them and have followed their lives throughout mine own. Their human foibles and struggles are things to which I can relate more than with most celebrities. I am deeply saddened by this deadly doublet. Photo courtesy of Getty Images (all rights reserved).
Posted by Kim Noyes at 11:59 PM

Email ThisBlogThis!Share to TwitterShare to FacebookShare to Pinterest
Labels: in memoriam, rantings and ruminations